How Did This Happen? 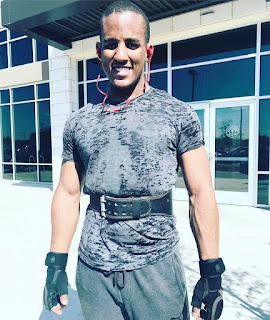 Wow! This is my kid! How did this happen?

I stopped by Gold's Gym where he works and exercises to drop him a little cash. He never carries money. He just swipes his card for every little purchase. I personally hate the idea of him never having cash in his pocket (not that it's really my business).

I had not seen him in a week, so when he comes out in full work-out gear —his weight-lifting belt and gloves, showing off his small waist and broad, muscular arms. He had just finished lifting. The definition of his physique notably more pronounced, veins popping out of his arms. How much he has grown and developed his body was strikingly noticeable to me. Especially, because he's always complaining that he doesn't feel like he sees results!

This boy who was overweight most of high-school, his body all puffed out as a result of horrid medication and an even more horrible diet.

“There’s nothing better than a cheeseburger and a milkshake,” he would say.

Throughout most of his childhood, his diet had never been good. Anything green was a definite, "No!"  Everything he ate had to be plain and dry. There was no mixing together of foods. Everything had to be separate and distinct —no casseroles, no sauces, nothing wet or too soft in texture. Even french fries had to be skinny and crisp so that they didn’t taste too “potatoey.”

Occasionally, I may have been able to coax him into a healthy meal, but Lord, the drama that came along with it. Ugh! It completely took away my joy of cooking. Days slaving in the kitchen, only to be met with, “Do I have to eat this?”

The expression on his face was as if the food I was feeding him came from the trash can.
He was oppositionally defiant from the moment he could walk …away from me in the opposite direction of wherever we needed to go. His defiance crossed over into him defiantly eating only what he wanted to eat and not what I wanted him to eat,  as soon as he learned to say no. There were so many fights day after day.  Most of the time, I was just plain out of energy.

Cut to when he turned 18 years-old. He was working and buying his own food, which meant eating absolutely nothing healthy. One day we walk into his Psychiatrist's office and this time he tips the scale at 280 pounds. "That’s it!" She said. "You must change your diet …today! You can’t keep heading in this direction."

Hah! First of all, I laughed that she thought that was going to work. Secondly,  I felt like it was at least half her fault for all of the bullshit medicines that she tried over the years in order to tame his moods, depression, and anger. I had a real love-hate relationship with both his doctor and the medication.

We had been working on tweaking and changing medication for years. I knew that what he was taking was partly responsible for the mega appetite and the propensity to gain weight, not to mention, his behavior was still horrible!
To my surprise, that day when we left her office,  we got home and he decided to get rid of all unhealthy foods that he had bought. "Give this stuff away! We have to get it out of the house!" Suddenly, there was a light so bright! The Lord arrived and the angels sang, "Glory, glory hallelujah!"

In the weeks to come, he started researching on YouTube about weight-loss and bodybuilding programs. We had previously insisted that he actually workout at the YMCA gym where he had been employed for two years, both to help with his mood and his weight. We would tell him "We are not picking you up from work until you swim at least ten laps in the pool."

Two painful hospitalizations later,  we finally got him off of that horrible mood-stabilizer and onto the right combination of meds. It took an act of congress to get the doctors to listen to my instinct.  My goal was to get him on as few medications as possible and to take nothing that had a weight gain component.

He then researched a high protein, low-carb diet. He became obsessed with it, along with his workout routines by different trainers online. One year later and 100 pounds lighter, he was a different person.

One of the main ingredients in his transformation was the fact that it was ultimately his decision.  Self-motivation is key to a person with autism deciding to achieve a goal, especially someone as defiant as Kendal.  He is capable of doing anything that he sets his own mind to conquering.  No amount of coaxing from us could have ever made him completely change his life.

We are entering into his second year of this new-look. As with everything in his life …his accomplishment is still not good enough for him.

“I want to be elite! I want to be the strongest guy in the gym! I’m still weak compared to other guys.”
“I need the perfect formula to get stronger.”

He asks the opinion of any and everyone who will listen to him.

"What should I do to get stronger ...to tighten my abs ...to cut this remaining fat around my belly?"
"If I start to bulk up, won't that make me fat again? I never want to be fat again!”

He works in a gym! He is surrounded by trainers and like-minded people.  Yet, no one has given the magic answer.

The latest request?
“Mom. I need to hire a coach to figure out exactly what to do. Will you help me hire a trainer? They cost about 100 dollars an hour.  Will you pay half?”

“But Mom! I’m not as strong as so and so, or so and so. I want to look like the Rock," he says 900 million times, whenever I talk to him or see him, until I zone him out, walk out of the room or hang up the phone.

He changes from cutting to bulking, from bulking to cutting every other week.

What he should do next about his body, his workout routine or his diet, is the only thing he posts about on Facebook ad nauseam.  God bless his friends who continue to comment and try to help him.

One of my Facebook friends from high school even gave him his phone number so they could talk about these things. This had to be a God thing. As in, God saving me from killing him because he won't shut up about it!
(Thank you, special friend. You know who you are.)

Still, he wonders why women are not falling all over him because of the way that he looks. We try to explain that there is so much more to finding the right relationship.  Women want someone who will listen to them, and not just talk about themselves, constantly. This doesn’t compute for him.

He is currently taking an online course to become a certified Personal Trainer, with the help of his Transition teachers. So when he asks me about helping him pay for a trainer, I tell him to hire himself.

There are no magic answers. He's already way ahead of the game! Time and persistence will continue to give him results.

I pray that when he begins to work with clients, he will be able to acknowledge them for their progress, however incremental. Currently, he can not see his own progress. Everyone who looks at him sees this incredible guy who has completely transformed his body. He still sees someone who is not good enough.

I’m proud enough of him for the two of us. I just hope that someday he can be happy and satisfied with himself. He wants so desperately to find love and acceptance. I’m afraid that it won’t come until he learns to love and accept himself. 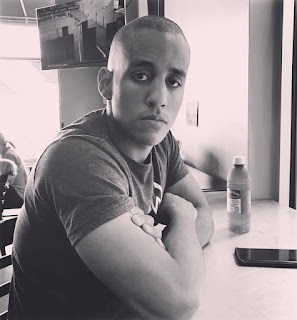 Edit: After having Kendal read this post, he wanted to add this. He actually lost 120 lbs total and since then has added 20 pounds back of muscle. He approves of this message.