He didn't come home on the bus. He didn't call to say he was staying after school. He was just a no show. When I called to find out where he was he said,

"I'm sorry. I forgot to call you. I was upset. I got verbally attacked today by this girl."

Turns out he stayed after to process through what happened with his Computer Science, teacher Mr. M., who also just happens to have Aspergers.

As many with Aspergers, Blue has a tendency to debate with people ...a lot. His views are almost always oppositional from the mainstream. He hates modern pop music! Rap music is disgusting in his view. Today's artists are not really talented. They all use autotune and sing about nothing important.

We live in Texas where football is everything. To him, football is a pointless game and all jocks are assholes.  Don't even bring up Country & Western music.  This is just a small sampling of how he thinks.

He's also a bit of a police officer of right and wrong and must inform everyone when they are wrong. It doesn't matter who it is -a teacher, another student, a good friend, a parent. We're all equal opportunity ignoramuses.

A certain girl who happens to be in a number of his classes, has the need to call him out ...often, on his oppositional views.  She just can't stand his argumentative ways and she feels the need to constantly attempt to put him in his place.  As I've told him in the past, who knows what her issues are. I'm sure she has some.

On this particular day, this young lady (and I used the term lady loosely) went off on an entire rant  about Blue in front of their whole Computer Science class, after Blue disagreed with the teacher.  The girl was not involved in the conversation.  The teacher was not offended, but she was.

When he came home, he was still pretty livid. As we approached bedtime he started to spin himself up about what had happened. "She's just a real b*tch! I hate her! And what's worse is she's smarter than me. Her class ranking in higher! She doesn't even work hard. Everything just happens naturally for her."

In the middle of his spin-up, in walks Red, the perfect target to dump his anger on. Before I know it, he's shouting at his brother,  Red posts up like Mr. Toughguy and the two of them are wrestling on the floor.  The same thing happens the following morning before school. These two big-ass boys are talking crap to each other, wrestling and they toss each other onto my couch! They're lucky it didn't just snap.
"I don't want to go to school!" Blue shouts.
I haven't heard that one yet this year.
"I don't want to have to deal with these kids! They think I'm stupid!"

On our way to school in the car, I suggest that he talk to a counselor or a Vice Principal about this ongoing issue with the peer.  If the girl is making him feel uncomfortable and not want to come to school because of behaviors that have to do with his autism, he needs to let someone in authority talk to her and tell her to mind her own business.

He yells, at me! "I can't do that! That won't help! You don't understand! I get on her nerves too! She will say that I can't mind my own business!"

I give several suggestions as to how he could remedy the situation. All are met with, "You don't get it mom! I know what I need to do."

I get back home and e-mail his Case Manager letting him in on what's going on. Blue told me he wouldn't be able to talk to him, because he had a class that morning. I was concerned because the girl would be in his second period class.

No sooner than I sent the e-mail, my phone rings. It's Blue. "I'm just checking in to let you know I have the matter resolved. I had a sit down conversation with the other student and my Computer Science teacher. We explained Aspergers to her and now she gets it. And it turns out she doesn't hate me."

Scratch the record! There was no reason for me to get involved. He's got this. He is going to be 16 years-old next week.  He is his own advocate. He doesn't need his mommy getting involved to solve his problems. Lesson learned.

Please mind your own business. 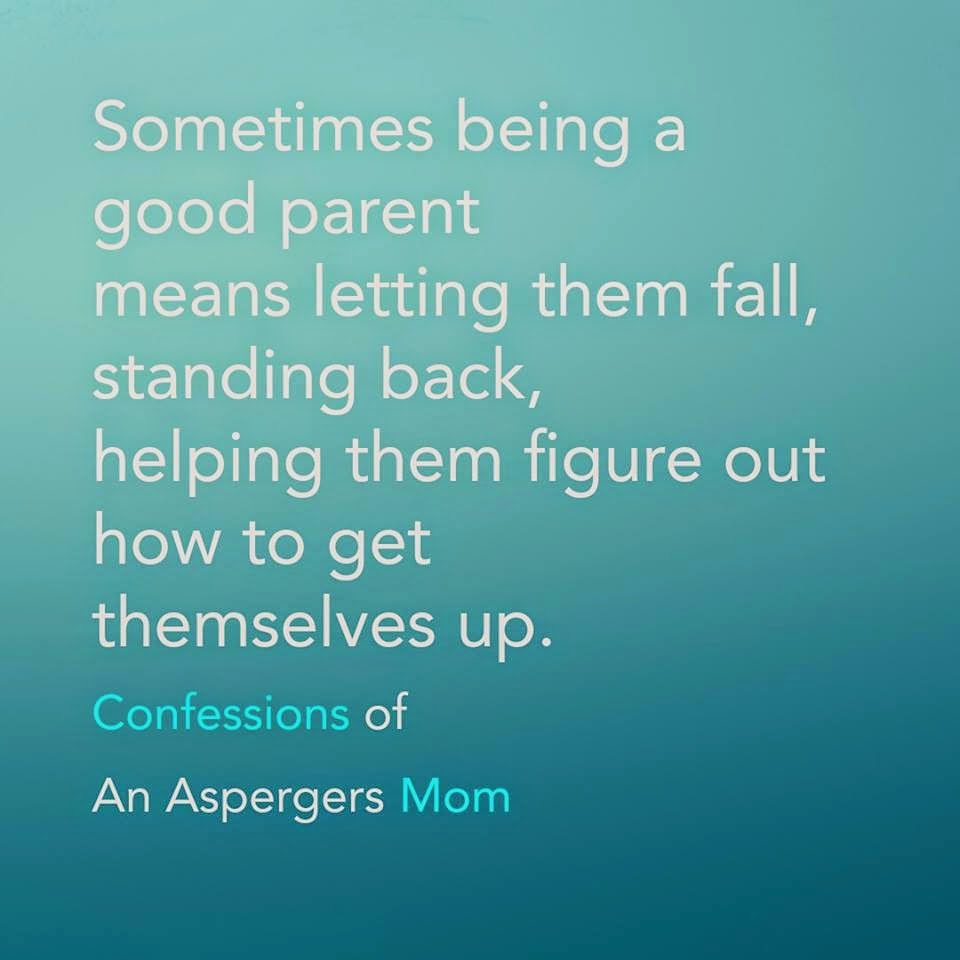 Within moments of him making me feel like an idiot, for trying to come to his rescue when he doesn't need me to --I get a text from his brother. "Mom I forgot my medicine can you bring it to me at the Community College?"

"Um no. Your medicine is your responsibility. Instead of playing with the dog this morning, you should have been taking care of your business. You will have to survive without it."

Posted by Karen Wesley Writes at 9:41 AM