The last few days have been hell around here.  At first I blamed it on the full moon.  When that came and went, I didn't know what to blame it on.  Am I living in Twilight Zone or what?

The Hubby was out of town most of the week, and it seemed like Red was taking full advantage over that fact.  Every night he started ranting and raving over one thing or another.  He's been stuck on what a family of sinners we all are. We all curse like sailors!  None of us are Christian enough. He wishes he had been born into a "real Christian family," with a father who is a Pastor. He's been in and out of being almost manic.  He certainly isn't grounded in reality.

We don't curse any more than he did a year ago, before he went and became perfect. If he hears a curse word come out of my mouth it's out of shear frustration with his behavior. Everything is extreme with him, black or white, all or nothing.  No one can live up to his level of perfection, including himself.  But of course, he never looks at himself.  It's much easier to blame and criticize the world all around him.

He seems to be angry for no apparent reason.  He is depressed.  He has feelings of aggression towards me and his father that he has not acted on, but they are there, boiling under the surface.  It amazes me how he goes out into the world and puts on this happy-go-lucky facade.  Well, maybe not happy, but at least not angry or manic.  When he comes home ...my Lord! He changes into Mr. Hyde.

Then we have Blue, who can be aggressive.  The one person in the world who pisses him off just enough, and he feels safe to hit is of course, his brother.  Blue has been back on a bit of a anxious, agitated, anger roll lately.  He's fine at school.  He's great when it's just the two of us alone.  In fact, we've been having some great times together and some awesome conversations.  However, when you put him into the mix here at home, with Red and we have a great mix for explosions.  Blue wants to control the world.  He really wants to control his brother.  He feels like his brother is clueless, because he doesn't think the same way that he does and he really wants to straighten him out, by yelling at him and trying to control his every move.  Yeah! That's really going to work.


"I love each and every member of my family...individually. It's just when they're together ...I don't like any of them.

Hubby comes home from the business trip.  When I tell him of the antics that have been going on while he's been gone, he is pissed to put it mildly.  He has so had it with the disruption to our lives caused by Red.  He would really like him out of the house yesterday.  Of course it's just not that simple.

It's really hard to remain calm when your teenager is being, belligerent, loud and extremely disrespectful.  I'm sure it's even worse if you are a man who works hard and believes he deserves a certain amount of respect.  Unfortunately, Red just doesn't have any respect to give, not to anyone in this family.  Especially, if you challenge him and become aggressive when he is already feeling aggressive.

He only respects authority when he feels that they have something of extreme value to take away from him. He respects his job, because he doesn't want to lose it. He wants the money.  And he actually likes his job very much.  He rushes to show up on time, like I have never seen him rush in his life! He's a model citizen while he is there.

He respects police because he knows that they can take away his freedom.  So he never crosses a line with them or when he thinks they may become involved.  I think here, at home, he really and truly feels like he has nothing to lose.  He can not seem to grasp the fact, that he could very well lose the privilege of living here. We have proven that this can happen.  Our oldest son lost the privilege of living here when he no longer wanted to respect our home, or our rules.  He had to get to steppin'! Get his own apartment. Yes. He had struggle harder than he would have if he was able to continue living here. 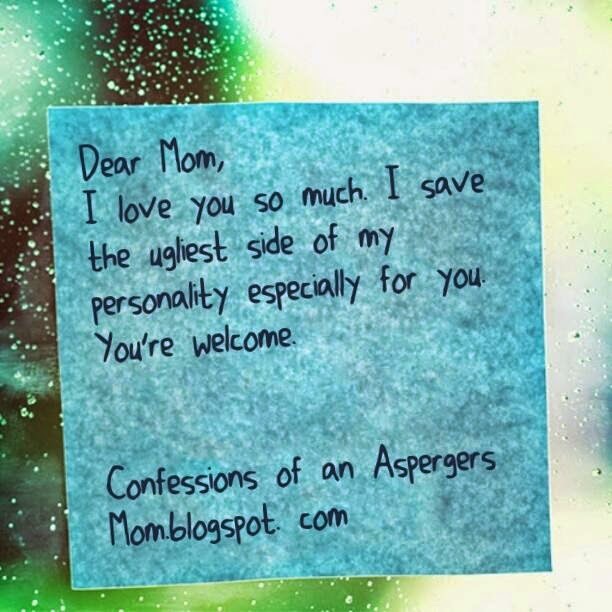 The ranting and raving got so bad the other day, I actually texted his pastor and asked him, if he knew anyone in the church who would let Red come and stay for a while.  He said he would look into it, but it's doubtful.

Anyways, it's just been a circus around here.  We've been going from one rant to another.  If it's not Red ...it's Blue.  Blue takes out his frustrations on his brother and vice versa.  Much of this is typical sibling crap, it's just on steroids because of their levels of anger.

Then of course, we have my mom here who just can not manage to keep her 2 cents out of anything.  She gets upset, and hold's a grudge whenever Red opens his mouth and pours out a bunch of nonsense.  She takes everything they say and do personally.  She has no life outside of this house, so it's almost like she thrives over the constant conflict ...spewing out personal insults to make matters worse. It's like managing a freakin' kindergarten around here.

Anyways, that's my rant.  I had to get this out of my system so that I can go back to playing the role of Mother Theresa, instead of the raving lunatic that really am.

I will leave you all with this ...this morning as the boys are arguing over everything and nothing at all, I said this to Blue,

*This actually holds true for a lot of people. Keep this in mind when you're arguing with someone, who just doesn't get it.

Posted by Karen Wesley Writes at 10:51 AM