Living with the Aspergers Christian 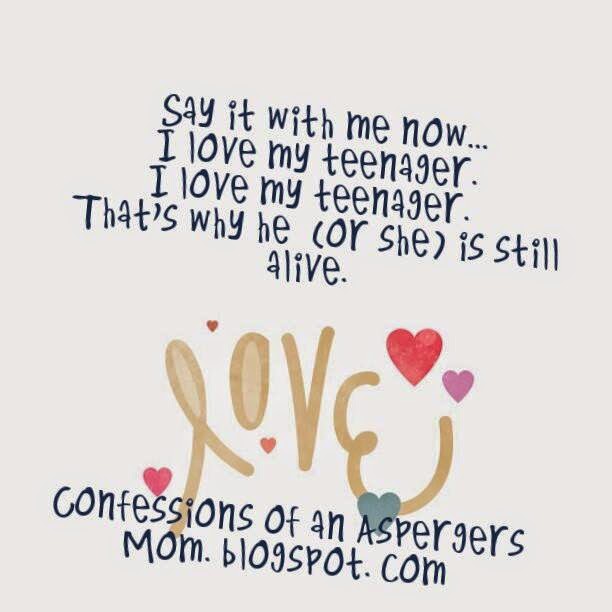 I love my boys with every fiber of my being, but some days they are so hard to like.  I know how difficult life must seem to Red right now as he faces the realities of adulthood.  Change is hard for the average human, for a teenager with Aspergers, change can be excruciating and therefore, very painful for those who love them the most.

At 18, most kids are excited about the possibilities of independence. Who wants a parent around always telling you what to do, when to come and go when you no longer feel like a child?  Red wants the best of all worlds. He wants to remain at home.  He's afraid of leaving.  Yet he feels, that it's us, his parents who need to do all of the changing in order for us to get along.

I have written before about him being the Annoying Aspergers Christian.

His latest sermon is about how we should "never curse" because cursing is a sin.  Well, so is disrespecting your parents but you do that every.single.day.

"But you guys shouldn't try to get revenge just because I'm not respectful."
Um. What? We don't have the time or energy to put into revenge.

The reality is that actions have consequences.  If you run around yelling, demanding, and causing problems, we will not be going out of our way to do anything for you, besides provide the basic necessities of life.  That means no extra rides, here and there.  No stopping to pick up fast food for you. No money for movies and entertainment.

If you are relentless in your preaching and judgement, don't expect that we will not get exasperated at some point.

Can you imagine having your Pastor living in your house, for free and having him judge every single move make?  Oh and by the way, this Pastor is a bit of a fraud.  He has not fully studied the word of God.  Most of his knowledge comes from what others have told him, of course with their own spin on it.  He picks and chooses scriptures that he wants to enforce, without knowing the complete context of said scriptures, all while not walking the walk himself.  You are an adult who has studied the word of God completely and you have enough life experience to know how to apply your faith to your life. Does it sound like fun? This is what I'm living.

What I try to get him to see is his own behavior.  He is continuously yelling and screaming about what we need to stop doing.  Yet, he will not stop and remove himself peacefully, when we have told him in a calm voice, that we no longer want to discuss the subject.  When I have had enough and have asked him repeatedly to stop, but he won't, then he just may end up being cursed out! Now if he wants to avoid the wrath of my anger, simply leave the room! Walk away! You can not keep poking at the beehive and expect not to get stung at some point.

I am human.  I have feelings and emotions.  I can only stay calm and in control for so long.  And believe me, I am the most patient mother he could have EVER been given.

Part of the issue is that he wants what he wants exactly when he wants it.   This of course, is not always practical.  The other part is that he craves attention.  The other, other part is that he often does not know what to do with his free time.  So he comes into a room and expects to be entertained.  If he does not get the reaction that he is looking for than he gets louder and louder, or annoys the dog until he's yelping.  Better yet, he starts in on a subject that he knows we do not want to talk about, repeating himself over and over again, revving himself up, until he gets some kind of commotion going.

He has never been particularly aggressive, but there are moments where he towers over me with clinched fists, aggressively, and loudly, blocking my way so that I can not leave a room or he will not leave a room.

Something has got to give here.  I don't know how much longer I can not continue like this and my husband's fuse is even shorter than mine.

The good news is, that he continues to do well in all other settings including his Adult Transition Program.  He is now working 10 hours a week.  He goes off to events with his church, consistently.
I'm sure all while telling everyone who will listen what a horrible, sinful, cursing like sailors, family he has to live with.