Apology/Asmology ...When Apologies Get Tired 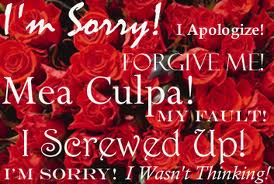 I get these text messages from Red during the school day....when he's supposed be...um...learning.


Love You Mom!!!:-)
Even Though I treat you like total crap.
I'm sorry about this morning.
You're the best mom in the world!!!
Love ya!

One could argue that he is being reflective.  He has probably had a conversation with his social skills teacher, whose nickname is Yoda, because...well...he sort of looks like Yoda and he is very wise.  Yoda probably made him feel like crap because he knows how much I do to make his life better.  I am probably one of the most involved parents he's ever met.

Your ordinary mother would be excited to get such a message.  Here is my reply...

Thanks...I guess.
You realize you treat me like crap...yet, you keep doing it.

That very afternoon ...he comes home ranting about girls and how he hates the whole dynamic of high school...how it's not fair that he doesn't have a girlfriend. You know the same old rant I've been listening to for months now.  He goes on and on until he has himself all worked up. Fighting with brother ensues.  Being disrespectful to me follows.

Later that night, he sits in his room on facebook, going through pages of all of these popular kids from his school...basically torturing himself.  His mood gets worse.  When I tell him it's time to shut it down and get ready for bed.  He snaps at me.  I remind him of his, "I'm so sorry for this behavior" apology that he  just sent me a few hours earlier.  I implore him, not to send me another one the following day, because it's obviously meaningless.  This at least gets him to stop and think.  He shuts the computer down shortly thereafter.

The following day...he gets to school and I get the same basic text message:

I'm truely sorry again, for last night.
I know you won't forgive me, but I want you to know that anyway.
Love you.

Anyone noticing a trend here?
Well I guess getting an apology is better than acting out, not looking back at your behavior, and not acknowledging how awful it is.  Still...an apology over and over again for the same thing and not changing the behavior gets really old...real fast.  Of course, I am his mother I forgive him.  Or maybe I don't forgive him, but I certainly don't hold on to my anger about it.  I would be a complete madwoman if I did...as opposed to the only partially-mad woman that I am.

I do let him know that if he is so lucky to have a wife...a girlfriend...or even a friend, in the future, she may not so easily let go of being treated like crap.  He may not be forgiven.  With some people once you blurt out some god-awful insult ...they may very well be done with you.  No second chances.
To which he says "That's because they're selfish and they don't really care about me."
Or maybe they just care about themselves more.
Posted by Karen Wesley Writes at 9:33 AM