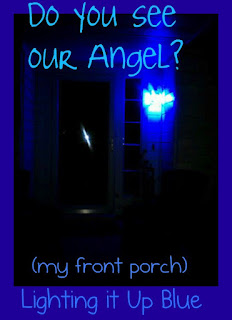 World Autism Awareness day was April 2nd this year.  I wanted to do some warm and fuzzy kind of tribute to the day, on the day, here on my blog.  Instead, I was busy living through the autism in our family.  Sunday, the day I would have started to put such a post together, was spent dealing with Red who was very disappointed that his plans fell through with his friend from school.

I'm always trying to fix things and make them a little better, a little easier for the boys.  So when Asperger's Dad announces that he is going out to get some ice-cream...I suggest that he take Red with him, to help get his mind off of his plans.  Red is starting to perseverate about things not working out.  He's getting louder and louder, with each repetitive statement.  My husband is looking at me like I have 3 heads.  You're kidding me right? Why do you want me to take him again?  Oh I don't know maybe a little father and son time. They go...Red continues his rant.  Dad even calls in the troops...big brother Slim Shady, to come hang with them for a bit.  It's not enough for Red to enjoy the time with his dad and his brother. Instead, he spends most of the the time stuck in perseveration land.

Meanwhile, back here at the Ranch (and by ranch I mean my house which seems to be getting smaller and falling part more everyday) ...Blue is getting frustrated with his Science Project.
"It's too hard!  It's just too much information to sort through on the internet.  I don't understand anything! Can you just have me excused from it?"
NOT! This apparently is a major grade.  We can break it down in to steps and get you some assistance, but not just blow it off.  He begins the shut down process and stays mostly funky about it for the rest of the night.  He snaps at me.  He rolls his eyes at Nana.  Nana snaps at him.  Oh it's just a barrel of fun!

He goes to school the following day and continues the funkiness with his Special Education teacher who is trying to help him.  It turns out that he is really much further along than he believes he is.  However, he is trying to make it more complicated than it has to be.  In his eyes, what he has done isn't good enough and isn't detailed enough.  Apparently, his science teacher, you know the person who is grading the assignment...thinks that if he turned it in as is, he would have a 90.  But that's not good enough for our mad scientist.

When his special education tracking teacher tries to hold him accountable and work with him to complete the assignment, he refuses to listen to her.  He is argumentative and combative...basically,  refusing to work and telling her that she is mean and not encouraging at all! When she asks him what she can do better he says, "You can leave!" Really nice!

So I spend World Autism Awareness Day in the Psychiatrists office, trying to process Blue's depression, anger and anxiety.  Trying to determine if adjustments are needed in medication or if he is indeed in danger of self-harm, because he has been making statements such as, "Everything is just too hard.  That's why I just want to end my life.  I can't take it anymore."

It is determined that he is expressing extreme frustration and depression.  The Psychiatrist is is less than thrilled that the Neurologist has changed the anti-depressant, anti-anxiety med that she had originally prescribed (which was NOT working and hadn't been for almost a year) but since I was starting to see some glimmers of hope,  she decides to increase the number of milligrams he is taking, which is more in line with his weight.  This, I hesitantly agree to do.  As usual, she also wants to ad an additional medication to the mix (Vyanse to help with focus and his thought process).   I take the prescription with the thought that I will go home, research it and decide weather or not to fill it.  He's already on 2 that I don't feel all that great about.  Have I told you how much I absolutely loathe the medication guinea pig, trial and error process?

I know there is much controversy about giving children psychiatric medication and I do have some ambivalence about it.  To say that I have mixed emotions about it, would be an understatement.  However, when your child is so anxious that he's exploding daily, or hiding in the bathroom all day because of fear of thunderstorms, when the sun is shining.  When his life is seriously impaired by his depression and anxiety, and he can not work to his maximum potential at school, you do what you have to do to help him!  I don't give a shit what people think!

He seems to be feeling better as we leave her office.  He is definitely in a better mood than he was at school that morning when he was being really ugly to his teacher.  This is what I mean by a glimmer of hope that this med is beginning to work.  It is a beautiful spring day at about 80 degrees.  There is a gentle-breeze in the air. We go have a late lunch, do a little shopping and go to his favorite place on earth...the Apple Store.  We have the absolute best afternoon together.  He is laughing and even joking around a bit.  Something he seldom does with me these days.

We decide to take a leisurely stroll through the outdoor shopping mall.  As we are walking,  Red calls to remind me that he has a PCP (Person Centered Planning) meeting that starts in an hour.  The PCP is basically a personal goal setting meeting to help Red work on his life dreams.  I had no idea that he had confirmed the plans for the meeting with our facilitator.  I have to rush home to host this meeting.  I will have to write details of this meeting in another post.

The bottom line is that I spent World Autism Day, fully engrossed and Aware that Autism is a big part of our family life.  It's here to stay.  I take care of it.  I try not to allow it to dominate our lives.  I try to keep it tame, playing in the background, not allowing it to completely take control.

On World Autism Awareness day, there was no time for me to become involved in the debate that's going on in the autism community about how we feel about autism, do we hate it, love it, accept it.
I didn't have time to chime in about what Autism Speaks does or does not do for our kids.  I was busy taking care of my family, trying to wrangle the autism in to submission...trying to find treasured moments, putting out fires, or at least keep them to a low smolder.
Posted by Karen Wesley Writes at 8:48 AM