A "Confessions" Facebook Post last week:
~~Never do something for your Aspergers child with an expectation that it will change his mood, make him smile or be gracious.  Only do it out of the kindness of your heart...or if it's in your job description as parent.  Otherwise, you will often find yourself disappointed.

When I came home from California, Blue was not at the airport to greet me.  He had social plans with his friends from school and he was unapologetic about it.  That's typical teenage stuff right?  I was disappointed not to see him, but happy that he made plans to get together with his peers.  When he finally comes home later that night, he greets me with a big hug and tells me he missed me.  There is no smile, no change in affect.  I don't care.  I am grateful for the hug.

It doesn't take long before he's angry with me.  Like try...the very next morning,  when he wakes us up to ask if we can go out for breakfast.  This is the first time I slept in my bed for a week.  But who's thinking about that?   The answer was of course, "Not today."  By the way, it's raining outside and my pillows are feeling especially soft and my down comforter is cradling my body like a long, lost lover.  I was in the sweetest dreamland before...scratch the record!  WAKE UP I'M HUNGRY AND I WANT TO GO OUT!

He goes downstairs to discover that there is not enough milk for the oversized bowl of cereal he poured.  This is end of life as we know it.  It's like a national disaster.  To top it off, then he discovers that we ate out after the airport...without him.  How dare we do something fun, while he's out doing something fun...with someone else!?

Later that day, I take him out with me to grab a bite of lunch and run some errands.  He becomes angry because we're not going to Mc Donalds.  I have come to loathe Mc Donald's because of how processed and unhealthy the food is.  I can think of lots of better ways to get high calorie intake like...Red Velvet cupcakes and wine, for instance.

"How about you be grateful that you're not eating at home?" I ask giving him something to think about.  His mood improves only slightly after he eats.  I was kind of hoping that we were going to have some happy re-bonding time together.  Thus the lesson for the day...don't go having some expectation of a certain emotion.  He is far short of happy.  There are no smiles on his gorgeous face the entire day.  In fact, after we finish our errands and return home, it doesn't take long for the anger to come out to play with me again.

He is really not happy that I was away...that his routine was broken...that he had to do things Dad's way for a week.  "Do you know how hard it was for me to be without you last week!" he grumbles!
"I'm sorry it was difficult for you.  But I wasn't exactly on a pleasure trip.  I was caring for my father who was laying in a hospital bed.  It wasn't fun for me either."
This gives him a little perspective.  He straightens up...a bit.

I get it.  He doesn't like change.  And let's face it, Dad doesn't spoil him the way that I do.  I guess I've created my own little monsters, by busting my a** trying to make them happy all of these years.  Even though he did not appreciate most of the ways Dad does things,  before he goes to bed, he makes a point of telling me that Dad got him to school earlier than I do.  Dad's morning routine works better than mine.

Wow!  Yes...we are now following Dad's routine.  Well...except for the 1 morning this week that I didn't hear my alarm go off and I was late getting everyone up.  All hell broke loose! He hates to be late.  He hates to be rushed.  He loathes the unexpected...period.  Seeing as I am not the most organized person in the world,  sometimes...Sh*t happens, much to his dismay.

I have to say...thus far, I am disappointed with the new medication prescribed by the Neurologist.  He is far short of a happy camper.  He walks around here grunting, huffing and puffing, blowing up just about daily.  You can reign in the meltdowns a little easier, but generally speaking if things don't go exactly the way he wants them to go...he's pissed!  I don't really want to make major changes to meds with this being the last 6 weeks of school, but damn! Something's gotta give.  I want my sweet child back! I hope he's still in there somewhere. 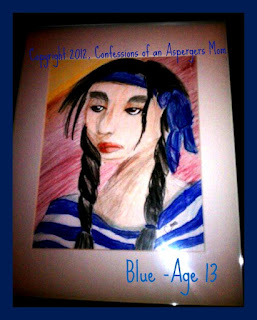 Blue made this drawing for his Social Studies teacher  who taught him about Native Americans.  He had it matted and framed to give it to him for his birthday.  Then, he asks me for the 20 bucks to pay for it!  The kid really does have a good heart and if I must say so myself...he is helluva talented!

What did I get for my birthday you ask? A card...bought at the drugstore...by his father...that he graciously signed. I should be grateful right? Right...
Posted by Karen Wesley Writes at 10:26 AM