The celebration of Blue's 13th birthday started on Friday morning.  I have tradition of waking them up with my off key version of "Happy Birthday."

He barely opens his eyes...says, "good-morning mom," but doesn't get up.   A few minutes later I come back.

It's 7:38
You're going to be late
It's time to wake up
And eat your pancakes

Breakfast is served with a candle in your pancakes or waffles and I sing again.  I don't have many traditions, so I hope this is one they will remember and perhaps pass on to their children.  Scars from my own childhood of not celebrating birthdays because of my mother's choice of religion, make me want to over-do it a bit with my children.  That doesn't necessarily mean buying them expensive gifts, or having huge parties, but making each birthday special and memorable in some way.

After school on Friday, there is a school dance.  He and his friends have been talking about Valentines Day and this dance for the past 2 weeks during the carpool to school.  It seems as if the interest in girls is starting to blossom.  The interest is mostly in it's very early, unrequited crush stage.
"I'm really scared to say hi."
"What if she doesn't like me."
"Do you think she likes someone else."
"What if she frowns at me and doesn't say anything?"

It's just so funny to listen to them talk, while trying desperately not to get in their business.  Any and everything I say embarrasses Blue to pieces. .

The night of the dance I tease Blue..."Isn't it nice they're having a school dance just for YOUR birthday."

Saturday is an all day "Destination Imagination" tournament.  D.I. is all about teamwork, creative thinking and problem solving.  All of his buddies from his social skills class @ school are on his team, which makes for a really interesting dynamic.  I elected Dad to manage the team.  It's great for him to get a taste of what life is like on the spectrum from these boys.  It helps him realize that it's not just "our" boys who have these behaviors.  This is autism!  As it turns out, Aspergers Dad  is great with these boys.  If only he could apply an ounce of that patience to Red.  But as my mother says, "Red would make Jesus Christ want to scream."

Dad and Blue are gone all day for the tournament, which would have been nice if Red were not complaining all-freakin-day-long!  I was ready to jump out of my skin by Saturday night.  I finally locked my door and went off duty. 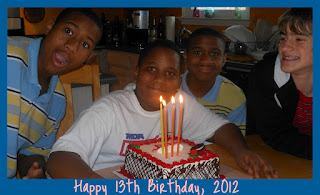 We have the real birthday celebration on Sunday afternoon.  I take Blue and his best friends, who are also on the spectrum,  to a place filled with trampolines for 2 hours of jumping.   On to Fudruckers for lunch afterwards, an IceCream cake back here at the house and hanging out for video games.  Blue's friends are so funny and honest, yet quirky and blunt.  6 hours with 4 13-year old boys on the spectrum and it was a pleasure.

In stark contrast, a couple of hours at home with 16 year-old Red...and I'm freakin exhausted.  He is doing better on his new meds.  For the first week...it was like magic, his mood was so great.  He is no longer tired all the time and he doesn't appear to be depressed.  Yet, he is still a handful and then some.  He claims boredom all weekend long, which in my opinion is mostly by choice.  He does nothing to make any plans with any of his friends, which he is more than capable of doing.

He complains about some program on his computer.  He complains about his graphics card, which has just been upgraded by the way. (Not good enough).  He complains about every weekend being the same and how BORED he is.  When prompted to call a friend and make plans to do something, he is so stuck in complaint mode, that he never moves forward to do anything positive to make his weekend better.  He rants so long and hard that he works himself up to the stage of screaming by the time his dad comes home.  I suppose he expects that after being gone for nearly 8 hours, working with a team of boys on the spectrum, that his dad would come home and be happy to dive right in to start alleviating his list of complaints.

I don't really consider this to be a meltdown.  I consider this to be a behavior issue.  In other words, I'm bored and unsatisfied and YOU PEOPLE are not doing anything to make it better, so I am going to make you all as miserable as I am.  WRONG Answer buddy.  That is not how life works.  Your yelling and screaming trying to get us to bend to your will is going to get you the opposite of what you want.

He would calm down and apologize for his actions then a few hours later, he would get right back to complaining.  I think a big part of his issue was that Blue was having such an awesome weekend.  He had to do something to take away from that.  It's been that way since the beginning of time.  He HATES other people's birthdays.

Needless to say...I was so glad to put his ass on the school bus this morning  --I wanted to shout hallelujah and do the happy dance.  If only I had the energy.
Posted by Karen Wesley Writes at 7:54 AM