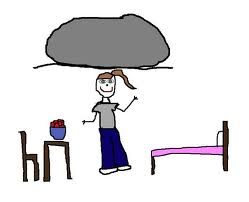 For months now I've had this gut feeling that Red's meds are not right.  Despite the meds, he is still very depressed and lethargic.  He's always complaining about being tired.  His social anxiety is still very much alive.  Sometimes, when a person is always complaining about something...it begins to fall on deaf ears.  But in the back of my mind...I know...something isn't right.

We go in to see the Psychiatrist on a regular basis.  I voice my concerns and she slightly tweaks this or that, or adds this or that.  Things get a little better, or a little worse.  We go back and she changes things again.  This past week she finally kind of listened to the fact that he is lethargic...always complaining of being tired.  She orders blood work, which she hasn't done in I don't know...ever!  I'm not a doctor, but even I suspect that if you're taking several medications, sooner or later you should be evaluating the blood, doing weight and blood pressure with regularity.  This time she gives us lab orders to take blood to check his thyroid.  I have this little feeling that says, "Thyroid?  It's not his freaking thyroid!  It's this got dammed medicine!" But whatever...

A little over a year ago, I try to get an appointment with this awesome Pediatric Neurologist.  The practice staff gives me the run around.
'Since you used to see another one of the doctors in the practice...you have to wait so long and go through some shenanigans before you can get into see another doctor in our practice.'

Finally, I get approval to make an appointment with the doctor, however it would be 6 months before we would actually get to see him.  Sounds ridiculous...right?  I go ahead and schedule the appointment.  I heard through the grapevine, that this doctor is not all about how many meds he can prescribe.  Sometimes he even goes with herbal remedies.  Sounds crazy...unheard of right?  When you're desperate to make things better for your child...you are willing to look under every rock until you find the answers.

Another little tickle in the back of my mind has been Red's cognitive decline.  In elementary school, with hard work, Red was an A/B student.  There were not nearly as many accommodations like he has now.  At this point, his work has been cut down to a minimum.  He gets almost 1 on 1 instruction in math and language arts and he's still behind the curve.  His reading is way below grade level.  How can you at one time be commended on state testing, and now be so far behind? Something ain't right.

I chalk this up to ...he's so depressed and fixated on social issues that he isn't focusing on his school work.  But still...I have that little feeling that something isn't right.  Could it be the medicine that's slowing him down?  The more meds he takes, the slower is his progress academically.  He is still passing every class, but he can not carry a regular work load.  His thinking is slower.  His processing speed has always been slow...but it barely has a pulse now. What's really going on here?

Today, we finally have our appointment to see the Neurologist.  I share my concerns.  He hears me.  He hears every-single-word I say.  He agrees that I should be concerned about cognitive decline.  He too is concerned.  He sees that Red is clearly still quite depressed.

He goes through every single medication that he is taking and tells me which are making him tired, which are redundant and unnecessary, and what will probably work better:

Intuniv 4 mg at night --is making him fatigued and makes if difficult for him to get up in the morning and truthfully is not helping him all that much with attention.  We will be cutting this down and eventually out.  How can you pay attention if you're tired?
Focalin -he is only on 5 mg in the a.m.  -we will be boosting it to 5 additional mg at noon.
Depakote --is a really "old-fashioned" drug.   He should be having blood-work done every 3 to 4 months while taking it.  There are other drugs you can take where you don't have to continually monitor blood (which hasn't been done any way).
Seroquel --he is only taking this at night.  It only stays in your system for 6 hours. This drug can also add to fatigue.  It's good for sleep but isn't helping with mood during the day.  He doesn't need help with sleep...so what's the point here? We will be tapering off of it completely.
Prozac (Fluoxetine) and Effexor (Venlafaxine) -the Psychiatrist just started him on the lowest dose of Effexor  ...did not adjust or take down the Prozac.  This is redundant, and Effexor will work better.  The Neurologist adjusts the Prozac down...and eventually out.  He adjust the Effexor up to the correct dose for his weight.

Before we leave his office, he has the lab take blood for a full blood evaluation...not just checking his thyroid.  He will also be doing an EEG and an MRI to look at his brain to get a clear picture of what is going on with him.  He will be doing cognitive testing so that we have something to measure and watch.  (Even the school has not wanted to take the time to do that!)

I leave his office almost dancing!  I am so happy that I followed my maternal instinct.  I am so happy that we are on our way to get a true picture of my son.  I am thrilled that I lifted those boulders so that we can see what is underneath, leaving no stone unturned until we have some answers.

Editorial Note: All medications do different things for different people depending on your body's chemistry.  I am not an expert on medications (although I'm certainly gaining a lot of experience).  You may have very different results. When all else fails...follow your instinct.
Posted by Karen Wesley Writes at 10:25 AM