Pulled a Fast One 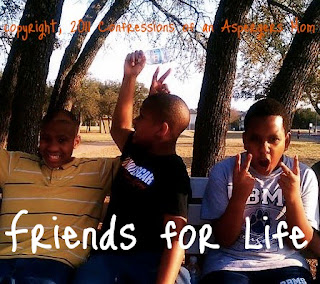 During this school year Blue became very social.  Most of his friendships developed with peers who are also in his social skills group at school.  They also have either high functioning autism, ADHD or some kind of social/behavioral issue.  He bonded more than ever with the twins whom he has known since they were all in PPCD (Preschool Program for Chidren w/Disabilities).

Since summer began, his cell phone which was once only used for him to call me, is now ringing with friends asking him to come "hang out".  I love it!  He has taken a trip to the mall ALONE with one friend.  This friend is also asking for him to go to a video/park and pizza place here in town --ALONE.  I'm still thinking about that one.
I have also finagled and planned a couple of opportunities to hang out with an old friend from elementary school by collaborating with his mother.  I am proud to watch him develop and maintain these peer relationships, but in the past week or so he's been slacking on the social front.  He's been hanging out a lot here at home, with me or his dad.  He has also spending an awful lot of time with his computer.
Granted it's been hot here in Central Texas, which has us all not wanting to do much. Whenever I ask him about playing with a friend he says, "Well...I'm kind of tired."  Or, "Maybe later,"
which turns into it's not happening.  He has gone to the movies and out to eat with his Dad which is great, but nothing on the friend front.
A couple of days ago he buys a new video game --a very realistic car racing game for his computer.  He spends the entire day playing and figuring out the game with his dad.  By the end of the night, he is an anxious mess.  He's pacing the floor, openly frustrated because things are not going perfectly.  He wants to win every race with out spinning out.  This is not easy to do on the very first day you play the game.
This morning he wakes up and starts the game before breakfast.  He comes downstairs ready to blow a gasket.  "Good morning," I say.  He ignores me.  He's got the angry, teeth grinding face.  When his brother starts coming down the stairs, that's it!
"Great!  That's the last thing I need is to listen to him smack his food and to watch him spread his nasty germs all around this kitchen!  He never washes his hands!  It's disgusting!"
Oh...I forgot to tell you last night he told me his brother was breathing too hard! Breathing?  Really?  Now you want to control how he breathes?  That's rich!
Mama decides...that's enough with the game for today.  Luckily, he has an art lesson scheduled.  That should be soothing.  I ask him to take a nice, hot shower and get ready for his lesson...no more game!  While he's at art, I text the twin's mom. "Can Blue come over to hang out with the boys?"
"Sure...they're just here watching Star Wars," she replies.  Great!
When Blue gets into the car I say, "The boys want you to come hang out and watch Star Wars?  Is that cool?"  He agrees, but says he is a little tired.  Mama knows once he sees his friends, he will be energized.   When we arrive at the boy's house, Twin 1 comes to the door.  "What are you guys doing here?" I quickly gloss over the question with something silly.
Sometimes...Mama has to pull a fast one.

Posted by Karen Wesley Writes at 9:23 AM