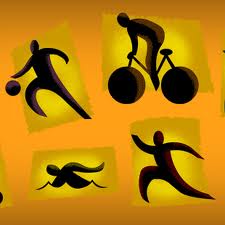 Over the past few weeks I've noticed my son carrying what looks like a 4 month pregnancy.  The medication change in May included loosing Focalin, which has some appetite suppressing qualities and adding Seroquel which can change your metabolic rate.  Add in the fact that it is summer.  He is no longer walking all over campus, up and downstairs every day.  He is now primarily sitting in front of a computer, or sitting in front of a television, movie screen or laying in bed.   Stir in a taste of boredom --therefore eating every two hours, mostly carbs little protein, little to no vegetables and fruit.  Combine all of these factors.  It equals an approximate 20 pound weight gain in a relatively short period of time.

Is his behavior better with the medication change? Yes.  Of course, we don't have the stress of school do deal with yet.  We still get the annoying others, the occasional screaming because we don't get what we want, and of course the non-stop talking and asking obvious, obscure, crazy questions.

So what are we doing about the weight gain?  Trying to change the diet of a 15 year-old Aspie is next to impossible.  Does that stop me from trying? NO.  I fight the battle everyday of making him add the protein foods that he likes into his diet, instead of allowing him to go the easy route i.e. pouring a bowl of cereal, or popping 4 Eggos into the toaster.  He now has to make a couple of eggs and take away some of the waffles or the cereal.  I am now buying high protein "Mootopia" and higher protein,  low fat vanilla soymilk.  He tried this at my brother's house and liked it.  We added a mulit-vitamin so that his body isn't craving nutrients that he is not receiving.  He hasn't seen a fast-food burger in over a month.  If we stop on the go now -it's a turkey sandwich from Subway, no fries!

We also added in a large dose of exercise.  We've been going to the YMCA several times a week.  We start out on the treadmill, move on to the elliptical machine, the bike and then weights.  After that we may go for a swim.  Some days we just go straight for the swim.  He balks at first when it's time to go.  Sooner or later we make it there and he really seems to enjoy it once we get into the groove.  He's been kind of fixated on "Karate Kid" the movie.  I think he feels like Jaden Smith when he starts working out.

I think it looks a little strange to have a teenage boy as big as my son, working out with his mother.  I can't help but long for his older brother to be the one who is doing this with him.  He played football all through high-school and his first year of college.  He's also been through basic training with the Army.  he would be the ideal work-out partner and mentor for his nearly 16-year old brother.  Unfortunately, right now, he is too self-absorbed in his own life to take any time for his family.

My husband is working like crazy and doesn't take the time to work out himself, much less take the time to work out with Red, who can be a real pain in the arse!  I am contemplating signing him up for a few sessions with a trainer.  But for now, it's me taking the bull by the horns, doing everything within my power to help him look good and feel good.  With Red, nothing is simple and easy, but I think we're off to a good start.

Don't forget to click one of the TOP Mommy Links before you go.  Just once Click per visit...thanks!
Posted by Karen Wesley Writes at 7:56 AM