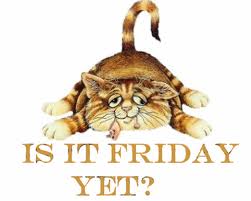 Again...this has not been a very funny week.  Blue's anxiety is going off the charts.  I am proud to say, that he spent the week in PACE Math Camp, which unfortunately started at 8 a.m. every morning.  PACE math is accelerated math.  You have to test to qualify for it, determining that you have the skills needed to be in it. He is in 7th grade, so he will basically be taking 8th grade math.  He scored an almost perfect score on the state achievement tests.  He obviously has the skills he needs, but that doesn't stop him from being extremely anxious about taking this level of math.

So although he did just fine in the camp.  All of his questions for the teacher were related to how anxious he THINKS he's going to feel if he takes this class.  On top of that, this weeks grueling schedule of getting up early and having to think for 4 hours made him pretty grumpy once he got home, especially as we reach the evening hours.

I reassure him, "Let's just give it a try.  I think you're up to the challenge.  You have the skills you need.  You have accommodations in place  if you need extra time.  You will be fine."  Nothing I say matters when he is in this state of anxiety.   Everything is wrong...nothing is right.  Everything I say or do gives him a reason to be angry.

Bugs Are The New Storms

We are in a drought here in Central Texas so there haven't been any major thunderstorms lately.  Also it's been painfully hot so little creatures are looking for a cool place to hang out.  Bugs in the house have become the new thunderstorm for Blue.  We're talking a few tiny spiders here and there and for some reason we are also being invaded by rolly pollies (potato bugs).  Nothing harmful, just annoying.  Nevertheless, Blue has been freaking out about them.

"I can't live in this house with these bugs!  They're taking over.  I can't go anywhere without seeing them!  Those cleaning people aren't doing a good job.  They must be just sitting on their butts, eating chocolate instead of cleaning this house right," Blue says indignantly.

The funny thing is, we were at a coffee house the other day.  He notices, the same thing there in the corner as he goes to plug in his laptop.
"I guess they're following you," I say.  He doesn't see the humor in my statement.

Yesterday he comes banging on my door while I'm in the shower.  "I have to use your restroom!"
"Why can't you use another one?"
"Red pees on the seat in his bathroom and downstairs there's a spider web!"
"Tell Nana to help you with it.  I'm in the shower!"
"She can't help me.  You can't actually SEE the spider web.  But I know it's there!"
"So I'm supposed to get out of the shower dripping wet?"
"Well...yeah!"

So yes...it's just a barrel of laughs around here.

Here's what I have for Funny Friday:

We're in the backyard.  Blue is watering the brown areas of the grass, as he is trying to make chore money so that he can buy a new steering wheel for his car racing game. Red is standing around...in my face, blocking my view of the grass, trees, flowers and sky, talking non-stop about nothing.

Aren't I the sweetest mom ever?  It's a PMS week.  He's lucky that's all I said.

Posted by Karen Wesley Writes at 11:38 AM