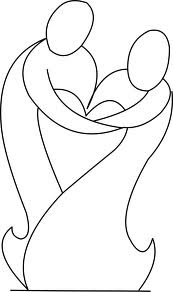 Today is the big wedding we came to Maryland to attend.  My husband's brother is getting married.  Hubby will stand up with his brother.  Can't wait to see him in that tux!  He didn't wear a tuxedo at our wedding.  We had an African themed wedding,  so he wore a beautiful linen African ensemble.  I wore a pretty non-traditional wedding outfit that I designed.  A jumpsuit the bottom part was a wide pant with a bodice attached.  I wore a cape that looked like a dress that I would take off when it was time to party.  It's sort of hard to describe.  I wish I were at home so I could scan a picture of it.  I wanted to go very non-traditional -not serving wedding cake, but peach-cobbler instead.  I just about gave my mother a heart-attack with my lack of tradition.

Last night we attended the wedding rehearsal.  Red has a thousand questions as usual.  It dawns on me that neither he nor his brother have ever attended a wedding.
He says, "Only two people are getting married.  Why is everybody else walking down the isle and standing up there?  Are they getting married too?"
"Now let's just think about that question.  Your dad is standing up there.  Do you think he's marrying the girl he's walking down the isle with? Do you think they're going to kiss and have a baby?  No...they are here to stand up with your uncle, to support him because they love him."
Don't think for a second he only asked this question once.  He kept saying, "I don't get it.  Why are we here?  I don't get it.  Can we leave now?  I'm hungry."
Then he asks, "Why do people have to get married anyway?  You can have a baby and live together without getting married, so what's the point?"
Now his uncle already has like a zillion children and has been living with his girlfriend for years.  So this is actually a pretty good question...one that I flounder to answer.
I give him something about God prefers that we get married.  "When you are married you share a spiritual  and legal commitment.  You don't walk away so easily when things get tough...and things will get tough." Yada, yada, yada.  Does he get?  Not really.  Do I believe any of what I just said to him? Sort of.  The truth is I think marriage is a bit of a sham.  As a girl, I suckered myself into believing that it was a fairytale -happily ever after.  The truth is...it's a lot of freakin' work.

However, when my boys grow up...I do want them to have a family and hopefully one of them will give me a granddaughter.  I want them to be committed to being a partner and father, involved in the care and raising of their children on a daily basis.  Does that require a marriage license? Not really...but for my boys who believe in following the rules...they will believe that marriage is a binding contract.  So hopefully, they won't cut out when it gets tough.

Right now, Blue tells me he will NEVER get married and have kids.  He says, "Kids cost too much money."  Red is not sure if he will ever find someone who can put up with him.  He says, "You know how I fight with my family now...I'm afraid that I will do that if I get married."  I tell him that I'm sure that when he matures, he will have the skills to get along with people better (and I half-way believe this).

More and more lately Red asks these questions that just don't make any sense.  Sometimes I think his dialogue is just his way of thinking out loud --trying to process things.  Then other times I think...are you kidding me? I worry about him having these obscure conversations with other people.   They will think he's bonkers.  I am hoping that he only asks these non-sensical questions with me because I am his comfort zone.  Other times, it seems like he's going backwards cognitively.  He has always been pretty bright.  He can focus and learn everything there is to know about a subject of interest,  but as he grows older, it seems like if it's not a subject of interest, he appears clueless.

His executive planning appears to get weaker instead of stronger.  His common sense factor is almost non-existent.  This worries me, because I want him to become independent.  Lately, his younger brother helps him with things like step by step, making up his bed, now you need to do this, or that.  His YOUNGER brother tells him about saving money and setting goals to get the things that he wants.  Blue explains to him how life works, which really irks the crap out of Red.  He will say, "Just shut-up Blue.  I hate the sound of your little voice.  You're not smarter than me!" Which essentially means that he's afraid that his little brother may be smarter than him.  Blue even tries to explain that, "It's not that I'm smarter than you...it's just that I understand somethings better.  Everyone has different gifts."  (He got that from me...the gifts part).

Red's focus is off center.  Walking through the airport the other day, he is looking out the window at airplanes while he is walking through a crowd.  He's not looking where he's going.  I'm like, "Hello!  Look where you're going before you bump into someone."

With today's wedding I'm sure there will be a trillion more questions.  I look forward to both of the boys being surrounded by love and acceptance from all of their cousins, uncles, aunts, and grandparents.  There is nothing like the love of family to give you a sense of comfort.   They will be oblivious to any craziness and family drama that is going on behind the scenes.   I pray that they will just have pure fun.

Nameste' (peace be with you)
Posted by Karen Wesley Writes at 9:00 AM