Editorial Note: This was originally posted in June of 2011.  My days are so hectic right now, it seems that writing is a luxury that I can't afford.  I have two partially written posts that I just can't get around to finishing.  Too busy driving children and my mother all around town.  Goes to show you...my life hasn't changed all that much in a year's time. Meanwhile, I hope you enjoy.... 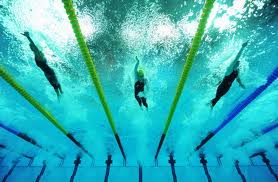 I have big dreams for the day...for the week really.  It's going to be  a week of working out, swimming, running, hanging out at the Y.  We've had such a busy summer so far, that I haven't had an opportunity to work out.  The boys have been swimming, but not much in the past two weeks because of camps.  Today, I plan to have both boys go to the YMCA with a friend to swim.  I will run on the treadmill for a half-hour or so and then join them in the pool.  HA!

First of all, Red has been complaining for close to a year about not having any friends, so today's plans include a new friend of his.  So why is it that when it's time to go...I find him in bed?  When I tell him I will call his friend to cancel, he screams..."NO!" Yet, he takes his sweet time getting up to get ready.  Now on the other end,  his new friend Adam (who also has Aspergers) is telling his mom, "I don't think I want to swim today.  I swam already."  His mother insists that he come because it is a social opportunity and both boys have been so "bored" this summer.  It seems that we mothers are working hard to make this friendship blossom.  I guess we have the tools.  Them?  Not so much.

Blue also brings a close friend Jake, who has Aspergers.  I love this kid!  There is just something about him that I find so endearing.  He is of course, brutally honest and has no problem asking me any question.  He doesn't see many boundaries and for some reason, I find it very charming.  He like Blue,  is also a bit of a rule follower and appears to think in very black and white terms.  He has a tendency to blurt out things and his volume is seldom on low.  He makes me laugh.  Watching him and Blue together just lights up my heart, because they've been friends for so long and have worked at maintaining their friendship despite the fact that they are no longer at the same school.

Are you keeping up?  This means there are 4 Aspie boys on this trip to the pool.  Red and his friend Adam just kind of mill around for a while.   It seems they are trying to decide if they will actually get in.  They finally do.  Jake, Blue's friend takes his swimming test and then they're off swimming, mostly together.  I'm chatting it up with Adam's mom, Angel (let's call her).  They met us there.  The next thing I know...I have no idea where Red is.  He's off in his own non-social world.  His friend Adam is now hanging out with Blue and Jake.

It's nice and steamy in this mostly indoor pool.  I need exercise desperately.  Finally, I get in to do a few laps.  Not long after that, Red's friend Adam has had enough.  He goes to change out and is ready to leave.   A few minutes later, my boys are also ready to leave, but of course, they want to stop and get something to eat.

At first Jake is resistant.  Eating was in the plan as far as he knew.  Blue and I coax him into being a little flexible.  I tell him I will call his mom to make sure it's o.k.  Of course it's fine.  Now the big question when you have more than one Aspie you're dealing with is, where can we eat in order to make the majority happy?  I make what I think is a healthy choice.  3 of us agree.  1 person adamantly disagrees.  This person of course is Red.

He makes such a major stink in the car.  It isn't pretty...at all!
"Why do I have to eat that!?  Their fries are disgusting!  I don't like anything there!  I want a milkshake!"  You know the drill, why can't we go here...or there?
Blue is so embarrassed by his brother's behavior he's ready to give in.
"Just let him have what he wants mom!  Just forget it!"
"No...we're not going to do that.  We have a decision.  There is a majority and that's that."

From the back of the car Jake says, "Yep! That's right!  Majority Rules!"
Blue turns around and says to Jake, "Ssh!  Don't say anything.  You're just going to make Red more mad."
Jake doesn't really care or is oblivious.  The next thing I know he's singing, "You can't always get what you want,"  the Rolling Stones song.  He's singing that line over and over with a smirky smile on his face.  I see him through the rearview mirror.  I start laughing so hard I thought I'd pee my pants!
Blue is fervently trying to get Jake to stay out of the dialogue.  He doesn't want his brother to get mad or start screaming at his friend.  Jake doesn't appear to care.  It's hilarious!
Red is still ranting, being very ugly.  He's not cursing...thank God!  But he is being extremely disrespectful and embarrassing the hell out of his brother.  Blue grows more and more frustrated.  He's about at the point where he wants to curse.  He just wants the madness to stop!  It's impossible.
Finally Blue says, "Let's just forget it.  I don't want to eat!"
"That would be allowing your brother's behavior to dictate what we do," I say.
To which Jake replies, "Yeah...we don't want any dictators around here.  I don't like dictators."  His voice remains very flat and he's laughing in a nervous kind of way.  This of course makes me laugh even harder.  I'm so glad that he's with us.  Normally, I would be ready to explode at this point, but Jake makes it all sort of funny.

I come up with an alternative for Red.  There is a sandwhich shop next to where we are going.  This still isn't good enough for him.  "I don't want that either!"  What he wants is a hamburger and fries.  This is not going to happen.  His demanding, disrespectful tone and attitude assures the fact that I will not give him what he wants.  When he turns down my option and is now yelling and ranting, I decide to take him home.

"I don't want to go home! That's not fair!"
I call my husband to prepare him.  Red actually tries to grab the phone from me.  I tell him, he can either go home peacefully or I can drop him off at the local police department.
Jake says from the backseat, "Is Red going to jail?  I don't like that yelling.  Is he going to jail?"
"No...he's just going home," I say.  "I was only kidding," I assure him.
"Well...you're right.  I don't like  all that yelling and I don't like dictators.  I don't want any dictators around here."
Moments later he starts singing again, "You can't -always get what you want," laughing nervously.
Blue is mortified at this point.  I am laughing uncontrollably, the kind of laughter where you can hardly speak or catch your breath.
We drop Red off at home.  He goes inside and rants with his father for another hour.
Jake, Blue and I go off and have our peaceful meal.

As if that were not enough...later we pick up 2 different autism friends to go back to the Y to play basketball.  I finally get in my run on the treadmill thanks to the "Black Eyed Peas" who really get me moving.  30 minutes in to my run...here come the boys.  They want to try out some of the gym equipment.  That's a whole other autism story!

Aspergers and autism is alive and kicking in our world.  Do you think my plans for the day were a little too ambitious?  Maybe I should have bowed out at the first sign of trouble --when Red was laying in the bed refusing to get up and be on time.  Nah...then I wouldn't have had all that laughter!

Help!!! I'm drowning over at Top Mommy! I need your clicks.

Posted by Karen Wesley Writes at 9:14 AM