Waiting for the Shoe to Drop 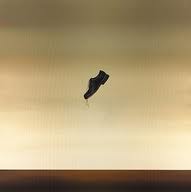 It's been so peaceful around here it's kind of eerie.  I know that I should just be grateful for the peace.  I should put out positive energy and thoughts that it will continue.  However, history has put a little cloud over my PollyAnna outlook on life.  We usually get about 5 good days and then all hell breaks loose.

Things haven't been shall we say --perfect.  That would really be weird.  We took a trip to Walmart the other day.  Red walks out pouting like a toddler because we didn't buy him anything other than food.  At this point, that's all I think I owe him  -the basic necessities of life.

"My life is terrible!  I'm so bored!  I never get anything that I want," he says as we walk to the car.
To which I respond, "You're life would be terrible if you were living under a bridge, with no food to eat."
"Well...that's probably where I'll end up," he says.
"I guess you should prepare yourself for it now, " I say.  "Get used to not having anything, because if you are not willing to work for what you want, that's what you'll have --nothing."

The pouting ends shortly after we get home and his younger brother continues the reality check. Blue,  the bossy, teacher that he is says,  "You can't yell and scream at Mom to get what you want.  You're not making any sense.  That's not the way things work!" Red actually listens for a change.

It's hard to say what it is.  Are the new meds working their magic?  Or is it the lack of stress for him? School is essentially over and he's been spending a lot of time here at home.  I pulled him from the program he was in.  They were not communicating with me.  They essentially pulled a bate and switch, not providing all of the services that they sold me on.   I found myself more stressed than ever trying to get him there on time and get Blue to school on time as well.

We've had little to no screaming for several days now.  He seems to be grasping the fact that we are not going to buy him anything.  He has to earn whatever he wants.  No...he doesn't have a job per se -but he has to do chores to earn money.  He now realizes that he has to pay for the doors that he damaged.  To make that task seem less overwhelming and defeating, in a therapy session a few days ago, we agree that he can keep half of his chore money and half will go towards his debt for the doors.

Yesterday,  he puts away and washes dishes, and helps me with some work outside in the yard.  He also barters a deal where he sells me his old video camera for $50.00.  He gets to keep 25 and 25 goes towards his debt.  This morning the first words out of his mouth are, "Can I do any chores today?"

Blue and Red have actually been getting along for two days now --knock wood! I have been just exhausted for some strange reason.  I think my body is depressed.  While I nap the other day, the two of boys hang out together in Red's room.  This hasn't happened I think, this entire year! Like I said, eerie!

Now...he is still talking incessantly.  He really has to work on listening during a conversation and not talking over people.  Watching a movie with him is a nightmare.  The questions come flying out of his mouth, loudly, non-stop.  I can't do it.  I have to leave the room or drink heavily.  At least he's trying to make an effort to hang out with his family.  I think he is figuring out...we are the one's who love him.  We are the best friends he has.

Thank you for your click below to support the blog: