It comes down to this...when I was a kid, my mother became a Jehovah's witness therefore, so did I.  I'm still recovering from the damage.  We did not celebrate birthdays or Christmas and I've been making up for it every since.  I make my own birthday last for at least a month.  I give my husband holy-hell if he doesn't turn cartwheels to spoil me.  Most of all,  I make absolutely sure that my children have great memories of their birthdays.

Our tradition is to start with pancakes or waffles in the morning with a candle and me singing "Happy Birthday." (Dad is never awake for this -or he's traveling on business.)  I usually bring lunch to school and cupcakes, cookies or whatever  (at least during elementary).  The fait accompli is a home-made fried chicken dinner or a choice of your favorite restaurant.  Sometimes there's a party with friends, other times, there's a weekend trip and other times it's just a family-night out.

This year Blue had friends over to hang out and play video games, shoot a few hoops and watch inappropriate videos on You-tube.  He had the twins over whom he has known since pre-k.  His friend Josh who was his best friend and classmate from 1st to 4th grade.  They still get together to play since Josh moved on to another school in 5th and 6th.  He also had Jake an elementary school friend who has since moved on to another middle school.  Finally, a new friend that is in his social skills group at his new middle school.

Some of these guys have special needs, some do not.  They are a wonderful bunch and Blue is blessed to have them as friends. 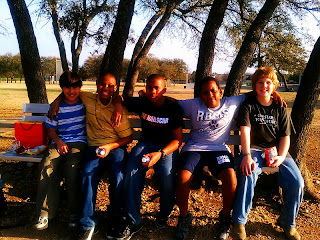 We took the party over to the elementary school where their friendships all began.  Mom got a little nostalgic and teary at the thought of how long they have known and supported each other.

I think my emotion is raw because of what Red is going through right now.  He has lost touch with all of his elementary friends and struggles to make new friendships in high-school.   We were blessed today that he had a session with his new Social Skills counselor which also involved meeting a new friend.