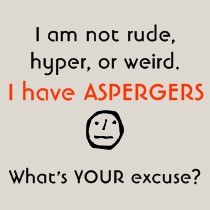 Editorial Note: I am republishing this post because of a very ignorant comment that was left on the previous version.  Now....I could have just let this ignorance go...but then, I wouldn't be doing my job as an advocate for my children and other's with autism.
The update and response to the comment, is at the bottom of this post.  Please read all the way through:


Has anyone ever said to you, "Having Asperger's is not an excuse for..." in reference to a certain behavior? Well the first time someone said it to me, I just about blew a gasket!  I wanted to knock this woman into last week!  She was Blue's 5th grade teacher for a hot second until I pulled him out of her class.  She told me that Blue was mean and, "Having Aspergers is not an excuse for being mean!"  Well -it may not be an excuse, but it certainly is an explanation.


How about this?  Having Aspergers means that you can be brutally honest  --that you don't have the filters to bullshit around.  You say exactly what's on your mind.  Now I realize that doesn't always look politically correct, especially when it comes out of the mouth of a child.  However, a child with Aspergers doesn't have a clue about being politically correct.


These things are something that a person with Aspergers has to be taught.  Because of their rigid brains, they may have to be taught over and over again.  They may get better at it ...they may not.  They may get it...but they may never totally get it (or so I've been told).


This past week or so -I've been in a bit of a snit with my son's high-school administration.  Red has been in a pretty dark place every since Valentines Day.  Why?  Of course because he wants a girlfriend.   He has no idea what that entails or what that really means.  Furthermore -he doesn't have a clue as to how to go about making that happen.   He wonders through the high-school corridors everyday seeing couples, hugging, and kissing, looking as he says, "happy".  He wants that.  He wants to be a part of something.  He wants to feel special.  He wants connection to is peers. They have our kids in these "inclusion" programs, and yet, they are not really included in much of anything besides classes.


So -let's just say that he has been behaving in a way that is totally counteractive to achieving his goal of getting a girlfriend, and maybe even sabotaging making any kind of friends.   I've said before that he is his own worst enemy.  He is displaying some behaviors that make his peers "uncomfortable" at best.  He has had conversations with me that let me know for sure that he "doesn't get it" and that are tell-tale that his thought process is completely skewed, negative,  depressed and not based in reality.


I go to the school and to inform them of his negative thought process  --that he is extremely depressed and somewhat irrational.  I am afraid that in his state of mind that he may say or do something that is inappropriate.  I ask work with him intensely on these thoughts, feelings through social skills and sessions with the school Psychologist.  I ask that for the short term, he not be unsupervised in any unstructured environments such as the cafeteria during lunch based on his current state of mind.
Three days later the phone rings...


Again --most people with Aspergers  are completely unaware of how their actions or words make other people feel. That part of their brain may not be wired correctly.  Combine that with, depression, immaturity and lack of social skills.


Yes...he seriously needs to learn about the consequences of his actions and words.  Having to speak to with the officer scared the bejesus out of him.  So...yes he probably learned that he can't go around saying whatever the heck he wants to whomever he wants.  And yes --it's good that he is learning some lessons behind the safety of the walls of his high-school, but could this incident have been avoided? Certainly.


Perhaps we should be spending time intensely teaching him the skills he needs to make friends and maybe connecting him with a group of peers who share similar issues who can support one another, so that they feel less isolated --less alone and therefore not act out inappropriately.  In fact, because I am so concerned about his social skills and his lack of ability to make friends, I took the step of having him in a private social skills group and individual counseling to support his needs.


The funny thing is, (o.k. so maybe not so funny) --a couple of days after this incident, I call the school Psychologist, completely distraught because we had just gone through the weekend from hell because Red was so disturbed by the events and by having to speak with an officer.  I told her, "I've spoken to him over and over about this and he doesn't get it!"  She said to me, "And he may never get it totally." This took the wind right out of my sail.

What I wasn't told by anyone including the Administrator who issued this "Directive," was that they had him sign the document which basically admits to wrong doing and threatens him with further disciplinary action should this behavior happen again.  I didn't find this out until I went through his backpack days later after a phone call I placed to the school asking where it was.

You had my 15 year old son with Aspergers who doesn't get it, sign an Administrative document that will likely go in his permanent school record, with out my consent, consultation, or presence.  I have a serious problem with that.  In fact, I've been told that an attorney would have a field day with this.

Let's just say...currently I am weighing my options.  And you haven't heard the last of this story.


UPDATE:
Blue's 5th Grade teacher made the original comment to me, has since been further educated about Aspergers.  I did pull him from her class because I knew that she didn't "get it". I refused to let my child be tortured everyday, for the entire school year in a classroom with a teacher who was obviously so uneducated about his disability...a teacher who's mind seemed to be closed.

She made the comment because my son had asked her child (who is also was also a student in the 5th grade) "Is your mom this mean at home?" I don't know seems like a legitimate question to me.

Well, guess who ended up educating her? My son!  He gave a presentation at our Annual Teachers conference in the school district about  "How Teachers Can Help Aspergers Students in the Classroom."

By the end of that school year, they became friends.  And my "mean" child gave her one of his original oil paintings to remember him by.  He also e-mailed her over the summer to see how she and her son were doing.

The uneducated comment that was left on my blog was as follows:

"What about the rights of the other students? Because your son has aspergers, it was ok for him to verbally abuse other 5th graders? Apparantly so because when the teacher pointed it out you had him removed from her classroom. My daughter was in a classroom with a child with aspergers. A great portion of the teacher's time was spent dealing with his misbehaviors, thus neglecting her teaching and the needs of other students.
I fear that her she will not meet her potential because the school system is so bogged down accomodating the asinine expectations of people with children with disorders like aspergers. I believe that every child should have the opportunity for an education, but not to the extent that it interferes with the education of others."


I asked my lovely peeps, mothers of those with autism on my "Confessions" Facebook Community Page  how they would respond to this obviously,  uneducated woman.  I got some great responses.  Here are a few examples:

Hope says, "I don't feel comfortable with the idea that having Aspergers is equated with misbehavior because that's incorrect. My son is a stickler for rules so misbehavior is just that...misbehavior. If it's not children with special needs it would be another group she blames for the teacher's divided attention (ex. ESL, physically disabled, etc. etc.) Won't she ask her legislators why classrooms are overcrowded, teachers have eroding job stability and insufficient support, and tolerance isn't taught in schools. This would be more productive than being a blog bully who spews ignorance."

Lisa says, "because my son has difficulties being socially appropriate in times of stress, children like your daughter have the chance to learn tolerance and compassion instead of growing up to be an intolerant, ignorant bitch like their mothers. My son does not choose to have a disability that causes these kind of outbursts, you however chose to sit down and type a rude and ignorant comment on my blog instead of taking that time to educate yourself about Asperger's so that you can be a kinder more understanding human being and be a wonderful example to your daughter. Shame on you!"

I really love Lisa's comment.  It is the most reflective of my feelings after first reading the comment.


The grand consensus is that we all should be working with our school boards, teachers, school administration and legislators to improve our education system for "all students".  Teachers do need support within the classroom so that all children can get the best possible education.  Aspergers, autism and other disabilities are not going to simply go-away, because they are an inconvenience to those who don't walk in our shoes.  They are not disabilities or behaviors that are chosen by our children.  We need to be supporting them, and teaching them with compassion instead of blaming them, or their parents.

This woman may or may not read these responses.  However, someone will be further educated by reading this post.  My son has already converted at least one closed-minded teacher.  I am here to carry the torch.

And there you have it in a nutshell.
Posted by Karen Wesley Writes at 9:48 AM