It's an "early release" day in our school district. "A teacher's treasure is a parent's miserable afternoon."  This was what I tried to post on Facebook that morning. For some reason the post didn't go through.  I took it as a sign from God.

They arrive within minutes of each other around 1:30 p.m.  Blue comes in first and quickly reminds me of our tradition to go out to lunch on early release days.  I hadn't even realized they were getting out early until early that morning.  I hadn't planned on going out.  Red and I had hardly been getting along for days, and I really did not want to take him anywhere.

I call their dad and ask him if he can break away from work for an hour to meet us for lunch.  I really did not want to be out in public --alone, with both of them with all of the fighting and discontent that we have been dealing with lately. Thankfully, he agrees to meet us.  I let him choose the place because the boys were debating about it.  Everyone has their reasons for wanting this place and hating that place.

"I threw up the last time we went there!"
"That place has hot girls that wait on you!"


"That place doesn't have good cheeseburgers."


"I don't want to see a bunch of hot girls! That's embarrassing!"
We have a nice lunch together.  Both of the boys are having a real love affair with their dad right now, which is more than alright with me.  Dad has been taking Red to school for the past week.  He gets up and gets ready for school with no argument -and of course, their is no stalling and arguing once they arrive. He and his dad have even had a "guys day out" one Saturday.  This is huge!

Blue has always been majorly impressed with his father.  He wants to be just like him in so many ways. He definitely doesn't want his dad to be upset with him.

Over lunch, they all enjoy talking "geek" together.  I'm sitting there trying my best not to zone out of the geek talk.  They all love computers and all things electronic.  The boys naturally gravitate towards the same things as their father  --science, history, cars and action movies.  Blue, however is a little more well rounded.  He not only has his father's science and math brain.   He also has my arts and writing brain.  Red -now I'm not sure whose brain he has!  He marches to his own beat.

The bottom line is --they are boys and I am so glad that they have their father as a positive male role model.  He is becoming even more important to them as they grow closer to becoming young men. And thank God for that! Hopefully,  this means I can run away from home more often!
The restaurant where we meet for lunch is located near a park that the boys and I used to go to frequently.  The park is right behind a little shopping area called the Arboretum here in Austin.  We go there to have lunch or ice cream, hang out at the book store and the game store.  This is usually followed by a walk on the hiking trail down to the pond where we feed the ducks.  The last several times Blue and I have done this, Red has optioned out.  He complains and takes the joy out of it, so we usually let him stay home.
On this day however, he is already with us so when Blue asks, "Can we go down the trail and see the ducks?" Red strongly objects. "I don't want to go to that park! I want to go home!"
"Why are you in such a hurry to get home? What to you have to do?" I ask.
"I don't know.  I just don't want to go to that park! I hate that park!"
Well...these days he HATES EVERYTHING, especially anything that is not his idea!
"We're here.  You wanted to come with us today, and WE are going to the park.  If you want to stay in the car, you are welcome to do that," I say matter-of-factly.

He continues to object.  I allow Blue to take the trail down and we meet him in the car at the bottom, near the pond so that Red can stay in the car if he so chooses.  That way he will be close enough for me to keep an eye on in case he changes his mind.
It is a gorgeous spring-like, January day.  The sun is shining the temperature is hovering around 74 degrees.  How could we possibly pass up the chance to be out enjoying nature on a day like this?  Next week it could be freezing, raining or maybe even snowing!

Blue and I walk leisurely alongside the pond observing the ducks swimming in patterns.  We quack in attempt to get them to come closer to us, though we have nothing to feed them today.  I watch parents with their toddlers and reminisce on the days when my boys were young, sweet and innocent like the 3 year old boy who is running away from his mother.

"You see that. The little girl is sticking close to her mommy," I say aloud.

"What are you trying to say mom? Girls are better than boys?" asks Blue.

"No...I'm just saying boys are impulsive.  They don't think about the repercussions of running away from their mother near a pond." Something that he and his brother used to do all the time.

We notice these two loud mouth geese sitting over near a picnic table.  They are squawking ostentatiously as if they are trying to tell us something.  Perhaps, "Don't even think about coming to sit at this table!" Or maybe, "Don't you get near my babies!"

As we start to mosey on back towards the car, they appear to be following us.  We stop and turn to look at them from up on the grassy area.  At first we think they are going to get in the water.   Instead, they grab a quick drink to moisten their vocal cords so they can continue to squawk.  Then they turn and follow us up onto the grass.  They begin to walk faster and faster, talking to us the whole time. We keep walking.  Blue of course is getting a little nervous.

"Mom, maybe we should hurry.  They might bite us."

"I think they're trying to tell us something Blue.  Maybe they want to come home with us. Or maybe, they figure if Red won't come and see us...we will go see him!"

At this point we are pretty close to the street.  From the car, Red sees them following us and gets out of the car. 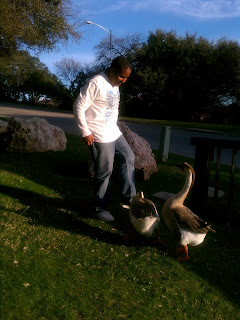 They thought his white shoe was a loaf of bread! 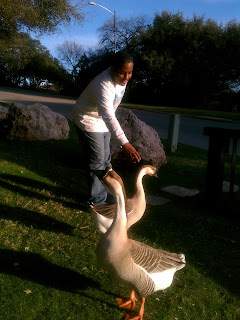 This is the boy who absolutely, positively...
did not want to go to the park!

I Live for your comments!


Move me up in the ranks at Top Mommy -with just a quick click!