I Want to Fly

For the most part this has been a lazy week with only one child in the house.  Even though he is the youngest, he is the low maintenance child of the family.  Meaning, he goes to bed and gets up on his own, feeds himself breakfast, and makes himself microwave meals without my help.
He does however, like to be entertained and go places frequently. They don't have to be expensive places.  He just wants to get out of the house, change his environment, see and do something to change the flow of things.  We can go to the mall, just to walk and look.  We don't have to buy anything.  He also loves to go out to eat.  I don't know where he got that from. (I say with sarcasm.)  That is a trait on my side of the family and since my husband and I have been married, and we are no longer in dire straits for money, he loves it too.  We waste a lot of money on this habit.

On Thanksgiving day Blue comes down to the kitchen as my mom and I are cooking and asks, "So what are we going to do today?"
"We're doing it," I reply.
"You mean I can't go anywhere?"
"Well, you were invited to your friends house in the neighborhood.  You can get dressed and go over there."
"They probably won't answer if I call."
"Well, there's only one way to find out."

This friend's mother seldom answers the phone for some reason.  I explained that it doesn't matter.  He was invited, and anytime he wanted to go, I would take him.  He wasn't really satisfied with this answer.  He wanted to go somewhere FUN!  And that wasn't happening...and so we have a miniature meltdown.

"Son...you told me that you wanted to be at home for the holidays this year.  You also said you wanted peace.  I gave you that.  I sent your brother to California so that we could have a peaceful, quiet holiday.  Yet, somehow you're still not happy.  I don't understand."

A few "Skittles" and minutes later, he pulled himself together, took a shower, got dressed and headed off to his friends house.  They played games, and jumped on the trampoline for a while.  They had a good time.  He called for me to pick him up in time for dinner.

I'd spent the entire day cooking. My mother who taught me how to cook, was there only as my assistant.  I wanted her to TAKE OVER...no such luck.  I found it all so anti-climatic  -all day cooking for a meal that was over in less than a half-hour without any fanfare.

The prodigal son (our 22 year-old) returned to the nest along with his girlfriend for dinner.  We are all a little pissed with him, since he hasn't called or come to visit in several weeks.  Lately, it seems like the only time he comes  or calls is when he needs something.  We are terribly disappointed at how self-centered and selfish he has turned out to be.  He has little or no time for his brothers who really could use the example of a neuro-typical big brother, a mentor in their lives.  Instead, both of the younger boys know that they can't depend on their brother to be there for them.  He may come through, he may not.  We tried for the sake of the holiday to keep things pleasant and peaceful.  And we almost made it...but I won't get into that.

The turkey was moist.  I cooked it upside down, in a bag so that all the juice flows into the breast. I added a two expensive cheeses to my macaroni, to give it a little pizazz.  Everyone said they  loved my experimental stuffing.  It was Emeril's recipe that he made on "Good Morning America" -Wild mushroom stuffing.  I thought it was just o.k.  It was delicious the next day as leftovers.

In my younger days, I used to so look forward to the holiday season.  It was all about the social aspects of it -all of the parties and family gatherings.  Now it just seems it's all about work!  Cooking, cleaning, decorating, shopping, more cleaning, and then putting away the decorations.  The next holiday meal I cook will be beg, borrowed, picked-up, catered -whatever! I refuse to be on my feet all day, too exhausted to really enjoy the meal. 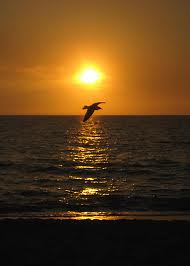 I think I'd rather make like a bird and fly away!


"Thanksgiving dinners take eighteen hours to prepare. They are consumed in twelve minutes. Half-times take twelve minutes. This is not coincidence."
— Erma Bombeck
Posted by Karen Wesley Writes at 5:27 PM