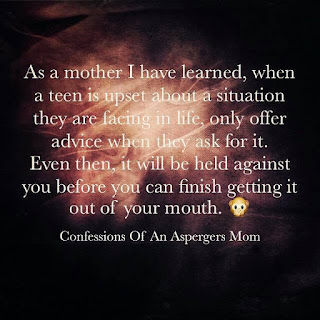 I know you’re not little anymore.

How is it that you became a senior in high school anyway?

I mean really. Where did the time go?

You will turn eighteen in less than a month. I have real mixed emotions about this.  I know that you do to, even if you're not totally conscious of it.

You have no idea how much I miss your baby days. Not only were you sweet, and perfect, but that was also the part of motherhood that I was really good at.

I know you hate it when I talk about when you were a baby, but remembering that time is one of the greatest memories of my life. I've earned the right to talk about whatever I want. I carried you inside me for eight and a half months, until the doctor literally cut you out of my body.

I know. Gross! Right? I love grossing you out! Sorry. Not. Sorry. (I also know you HATE my sarcasm.)

When you were a baby you were so sweet! You didn’t cry or complain much. If you did, all I had to do was take you out into the sunshine and let you roll around on a blanket. Sometimes, I would hold you in my arms and rock you gently as the sun warmed our skin, and lightened our worries. My worries then, were nothing like they are now.  I still had no idea what I was getting myself into with this whole motherhood gig.

As you began to toddle and climb, it was like an angel followed you around and protected you from the precarious situations you would put yourself in. You would climb on top of anything to get what you wanted.  Yep. You were independent even then.

Somehow, you were always safe from harm. Despite how nervous you made me.

You still make me nervous. I worry about you all the time.

I have no doubt that you will conquer the world and any mountain you decide to climb.

It’s your emotions that I worry about most. You think and feel things so very deeply. So intensely, sometimes, that you can become overwhelmed with not only your problems, but you often carry the weight of the world on your shoulders.

You’re one of the most giving people I know. Yes. You get that from me. You are the friend to the friendless. You want to help everyone and save the world. And let’s face it, this world needs a lot of saving these days.

You’re feeling the effects of this latest election.

You are taking on the problems of your friends.

I know you're worried about your high school career ending, and your adult life beginning.

You are swimming in a pretty deep ocean and I’m sure that it feels like you have an anchor tangled around your feet.

I want you to know that I see you.
I see your struggle.
I know that you are freaking out about so many changes coming down the pipeline of adulthood.

You have never been a fan of change.  It scares you.  Hell, it scares me!

Remember when you were leaving elementary school for middle school? That was scary, huh?

But boy, you came through that first year like a champ! You even started taking on advanced math by the end of 6th grade.

Those worries about dressing out for P.E. worked out fine. In fact, you became pretty close to one of your P.E. teachers. You even became an aid in his class in 8th grade, if I remember right.

Even eating in the cafeteria turned out okay, because that's when you finally decided to expand the list of foods you would eat.

Remember transitioning to that first year of high school? That was even worse than middle school!

You were bigger and angry, instead of just anxious. Your meltdowns spiked at an all-time high, That freaked me out, because I feel most things that you feel. It's like we're still attached by that unbilical cord.

You tried R.O.T.C. that year. You thought it would be a good fit for you. I hoped that it would be. But,  every Wednesday (which was Dress-Out day) was the worst day of the week. Your frustration would end up bleeding into the rest of your day until finally, we applied some pressure by having you drop the class after the first semester. That was a brave decision you made.

You survived that transition and by your sophomore year, you gained your footing. Remember?

You started making more friends. You became more self-aware than ever. You started your own club for other students like you, who were having a hard time finding their way, socially. We saw growth in your self-esteem.  It made you feel good to help others and to find your tribe.

You see, that’s the thing about you. You always come through. You always survive. As a matter of fact, you thrive.

In so many ways, you are light years ahead of your peers. I know that ultimately, you will be okay. But right now, watching you tread water is so hard for me. I want to help you, but I’m walking the fine line of trying to let you go and you really not wanting my help.

I know you don’t want to be dependent on me. You never have.

It’s like I’m standing behind tempered glass, watching you flail and flounder. I’m close enough to hear you scream, but unable to reach out and help you. It’s agony for a mother like me.

Transitions are tough. I’m going through one too. I mean, holy shit! I have two young adults now!

I’m at this very strange point in motherhood where a big part of my job is over. The waking you up for school, making breakfast, packing lunches, supervising homework, breaking up fights.

You have been doing all of those things for yourself for a while now. (Well, the breaking up of fights between you and your brother, not so much.)  At least now, he doesn't live here and when you do argue, there is no bloodshed.

I have moved past the consulting stage of motherhood where I resided for most of your adolescence. You remember, the days when you would ask for my help, and you actually, really wanted it!

When I give you an answer,  you spit it up, like you did when you were a baby after a feeding.  It’s like,  Anything I say, can and will be used against me in a court of law.

So here we are. I’m stuck between this rock and a hard place and you're going through a rough spot. I’m trying to step back, allowing you to make your own decisions, but keeping my mouth shut has never been my strong suit.

You’ve seen Nana when she shouts out her two-cents from another room . She doesn't even have to be a part of the conversation! You ask me a question and she answers. Yeah. I get it from her and she gets it from my grandmother.

Like you, I’m self-aware and I’m working on my ability to shut the hell up, but it’s not easy.

I feel like I should put duct tape over my mouth, so I can’t offer advice that you don’t really want.

I have always been a fix-it kind of mom and you know that about me.

So now it’s like, “Help mom! Fix it!” and then, “NO! Don’t fix it like that! That is absolutely the wrong way to fix it! Why did I ask you in the first place!?”

You see Blue, I learned the hard way with your brother.  I can’t be the fixer during your transition to adulthood. It’s a fine tight-rope to walk and my balance ain’t so good.

So, I put supports in place for you to use, but even they can’t do the work for you. You’re the only person who walks in your shoes. You have to do the work.

We have never had to be the parents who had to take things away and ground you because you were not taking care of things at school.  You always handeled your business.

Now, when I see you burying your head in your phone because it makes you feel better temporarily, I want to scream, “Put the phone down!”

I want to take it away because I know that it’s inhibiting your progress.  It's slowing you down. It's part of the reason you can't get your homework done, or get to school on time. But, I can’t do that. You’re almost 18.  I can’t start micro-managing your life now. You have to be in control. I can’t ground a damn-near adult for infractions of self-sabotage.

So, I watch you cozy up to the end of the cliff. I’m standing here, praying that you don’t fall. knowing that you’re bigger than I am. I can’t catch you, even if I want to.

I wish I didn’t have to watch. Why can't I just cover my eyes? Or leave and come back this time next year? I actually think sometimes, if I wasn’t an audience for you, you would do better.

Your brother is doing so much better now that he has some distance from me. So there is a whole other set of guilt and blaming myself for your problems.

I know, in my head, I am not the source, but it sure feels like it sometimes.

Well, when you’re yelling at me because you’re frustrated, it sure does feel like it is about me.

I know for sure, we will find our way through this transition.

I will rally up the troops to support you in areas where I can’t,  and you won’t let me.

We will get through this.
It won’t be easy.
But we survive.
We face our challenges, and we move through them.

And in the end, I know you will thrive.