2015 was a whirlwind of drama and change for my family. The biggest change being the fact that Red has moved out of the house and into a supported living environment. (That's my fancy name for group home ...that I don't like the sound of.) 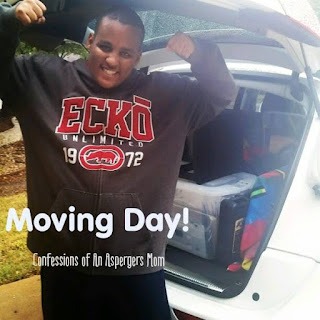 He loves it one day and he hates it the next. Mostly, I think he's okay with it, but he loves to make me believe that he is miserable.  He has a special talent for playing on my emotions and I have a special talent for allowing him to do it. I'm working on it, but it's not a simple habit to break.

The truth is, there is no ideal situation for him and if there is, I haven't been able to find it yet. There was no plastic bubble to move him into that would protect him from all of the trouble that comes along with learning to grow up and become a responsible adult. He doesn't have the skill set to live on his own, yet. I knew that getting along with roommates would not be easy for him, but I had a feeling that it would be better than the way he gets along with us. And so it is. He doesn't have any huge problems there. He is mostly compliant with staff. He likes his housemates for the most part. He thinks the staff is lazy. But hey, that should make him feel more at home, right? It's not the perfect or ideal situation, but it's a start and it's what we have to do for now.

Over the summer both of us had come pretty close to the brink of insanity, one of us a little closer than the other.  The level of intense feelings, emotions and behaviors had rendered me pretty close to incapacitated. I was unable to think clearly. I couldn't sleep and had little to no appetite. I found myself wandering through the days just trying to maintain my composure, while at the same time, trying to contain the explosions between the boys. I was like a zombie walking through a minefield.  Thank God that Blue is so independent, because I was basically parenting him on auto-pilot. 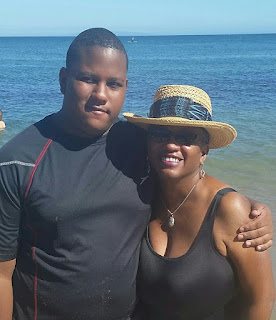 The good news is, that near breakdown this summer made my husband realize that he was about to lose me to the dark side of the force, so he sent me away with Blue for 2 weeks to California. I was nervous about taking Blue. I thought we may end up killing each other, but we actually had a good time, relaxing, bonding, spending time with family and friends. The adolescent Blue at age 16, is mellowing out quite a bit and can be quite enjoyable to be around, especially sans the stress of his demanding brother.

Blue has really come into himself in 2015. He has grown immensely. He is handling school extremely well, even when working with difficult teachers and peers.  He has been able to advocate for himself and pull through with excellent grades. He was inducted into the National Honor Society. He continues to run the club that he started for those who may not feel as included as their typical peers. He is developing more relationships with peers.  He even went on his first semi-date (with a girl that he likes, but won't date, because he's not ready to deal with all of the drama that comes with high school relationships). He has such a mature outlook on life. He makes me proud on a daily basis.

I started seeing a wonderful therapist this year. I am absolutely, over the moon, happy about the fact that I am finally seeing someone for ME! I have been driving the boys around to therapy for years, while knowing damn well I needed to see someone for myself. Therapy is helping me to come to terms with all of these changes and is helping me get through the post traumatic stress of living in total chaos for so long.

I have some battle scars that I am working to heal. I have given so much, for so long.  At times now, I find myself wanting to totally retreat and not give anyone anything.  I am often resentful when my family asks me to do anything for them especially, things that I know they can do for themselves (adults, who I have spoiled, especially my mother). I am also cutting back on what I am willing to do for Blue, simply because I want him to be able to leave this house and go to college without being so dependent on me.  So far, my therapist has been excellent at helping me work through this. 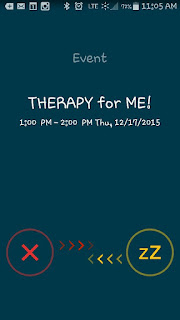 The transition into adulthood is not just a transition for Red.  It's a big transition for me.  I am trying to let go of control when it comes to his life even though he doesn't want me to.  I am  pushing him to use his resources (and he has many).

I no longer attend every meeting, doctors and therapy appointments, nor do I transport him to these appointments. I do still have to do some advocacy and coordinate things from behind the scenes.  Some of the staff from the agency that runs the group home leave quite a bit to be desired.  I however, am not the one to try to get over on. I try to make sure that they do what they're supposed to do so that he gets what he needs. I work in the background,  so that I'm not as much of a presence in his life. I feel awful for some of the clients who have no one to really speak for them, because in this world of services for those with disabilities, you only get what you scream for.

The most difficult thing is trying to maintain healthy boundaries between myself and Red.  He makes this so hard with his incessant phone calls and text messages.  I keep my phone on silent most of the time.  I had to put him on a phone schedule/contract just to cut down the number of phone calls.  It's working ...mostly. He has cut way back on the calls and mostly follows the schedule, unless he gets angry and anxious about something.  I only answer his calls at our designated time.  I will just ignore the call, or text him saying "I will talk to you at our appointed time."

Lately, I have noticed that slowly he is pushing the boundaries again.  When we do talk, he doesn't want to hang up. Ever! He wants to talk about the same negative complaints, which eventually send him spiraling and drive me to NOT want to answer the phone the next time he calls.  Again, I begin to feel myself being held prisoner by the calls, just like I did here at home when he would refuse to walk away or leave my room.

There's that self-imposed, motherly guilt that makes me NOT want to leave him all alone, hanging in the wind, feeling like no one cares about him. On the other side of that, is the feeling of resentment.  There's that whisper, (or maybe it's a scream) that says, "I don't want to do this! I don't want to talk to him! This is not how I want to be spending my time! And most of all, this is not healthy for either one of us!" He needs to build a life that does not include talking to mommy multiple times a day. I have tried to get his psychologist to work with him on this, but so far ...little to no progress.

On a more positive note, one of the biggest highlights of 2015 was our trip to the big island of Kona, Hawaii.  (During which time I took absolutely zero phone calls from Red.)  My husband won the all expenses paid trip by being in the top 1% of the sales force for his company.  He works for an international corporation, so there were people in attendance from all over the world, India, South Africa, Asia, Australia, Europe and of course, the U.S. There were 200 winners and among them, only 3 were African-American.  I may be a little biased, but I felt like my husband was the biggest winner on the island.

We put together a P.R. package before he was selected, about our life raising the boys, the advocacy and work that I do on this blog and my online support groups for parents of children with autism. I'm going to say, that our work/life balance package, was what put him over the top for the win. The company also gave a lot of credit to the partners and spouses of all of the winners. Thus, making us feel like the sacrifice of our partners time was worth it. 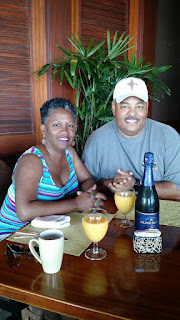 The trip was the most relaxing vacation of my life, probably because it came at a time where we needed it more than ever.  This life of raising two boys with special needs and taking care of my mom  is extremely hard on a marriage.  Both of us were on the verge of breaking down after a tumultuous year with our family.

The sound of the ocean was healing to my soul.  If I could have taken it back home with me, I would have. And let me tell you, it was almost impossible for me to leave it behind. 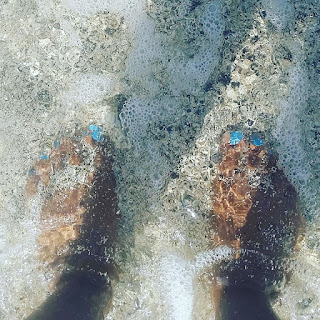 Everything was first class all the way, from the air travel, to our ocean front room at the Four Seasons Resort, where all of the staff knew my favorite drink and kept them coming. We were treated like royalty while we were there, right down to the private Keith Urban, concert on our final night. 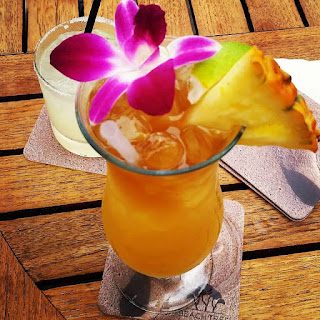 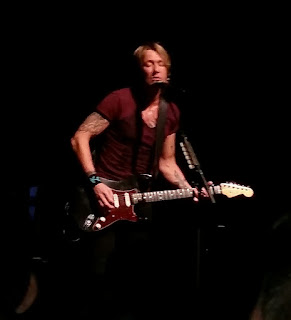 As we sat on the quiet beach listening to the waves crash against the coast I said to my husband, "Everything has been so crazy for so long, this almost seems too good to be true. Like when is the bottom going to fall out? When is someone going to step up and say, April Fools! We were just kidding! Good things like this don't happen to folks like you."

It never happened. The trip was perfect and apparently, we did deserve it.

p.s. I love your comments! Thanks for reading and hanging in there while I neglected this blog for so long.