The End of The Rainbow -Guest Post by Sue Smelser Nash

My son has marched to the beat of his own drum since birth! There goes the immunization theory for Aspergers. He was treated for ADHD from 1st grade until 4th grade at which time I just didn't feel like Ritalin was answering any of our problems. He was diagnosed rather quickly with Aspergers at an appointment with child development specialists at age 9. He fits the mold of Apergers rather well, except for the fact that he has no problem making eye contact and loves to socialize.  He just doesn't do it appropriately at times!

We grew up with many of the issues that I read about you all having every day. I think that is why this page, fb/Confessions Of An Aspergers Mom is so helpful.  It just confirms that we are not alone in what we are going through with our kids.

I don't mean to scare any of you with pubescent kids, but the teenage years were HELL! From 13 to about 15 years old I really would just like to rip from my memory! Rants and rages nightly for 1-2 hours, just like a colicky baby, only he was almost 6 foot tall and weighed 200 pounds. Luckily, it was only verbal rages and we never had to deal with him physically hurting anyone. I must admit there were a few nights during that time that I contemplated sleeping with my door locked, just because the situation was so volatile. We got through it with the help of an amazing psychologist.  We went through several before found one that actually had a clue! 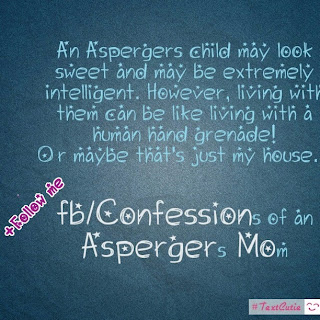 Abilify is our miracle pill. Though it did not completely stop all of the issues he did become much more bearable! My son is very intelligent - scored at college master's level on vocabulary, plays some instruments by ear, has a beautiful singing voice, a memory like an elephant.... but does math at about 1st grade level, writes like a 2nd grader, has the hygienic level of about a 12 year old boy, and has the judgment level of about an 8 year old. Sigh...

He graduated high school and went to a career training center about 2 hours from home for a year where he was supposed to learn a trade so that he could become employable instead he learned to smoke, curse, and sell his plasma! He did complete the program and I would be lying if I didn't tell you that it was during the first month he was out of the house that I realized how much stress he had me under! Many of you will go through the same thing! He moved back into our home and we figured out pretty quickly that he would not be able to get a job much less hold one down and he entered a sheltered workshop program.

We finally got him approved for SSI which alleviated many concerns about affordable healthcare and medications (Abilify costs over $400 if not covered by insurance!). It also opened many doors for him such as group homes, etc. He has always wanted to live independently and we have encouraged that because we know that we won't live forever and he will need someone to help him the rest of his life (with money, meds, decisions).  Though his younger brother has always said he will help him when we are gone it just wasn't enough security for me! So, group home lists are long and you can have to wait for years! We put him on all of them and even agreed as a family that if there was an opening within 2 hours of home it would be doable. Then I gave it go God to handle.

About 18 months after going on the waiting list, we got a call out of the blue from a private home just 25 minutes from our home. They had an opening. We toured it.  He loved it! They have a day program that he works at and earns a paycheck! He moved there the next week. We pick him up to come home about every other weekend and visit him by phone daily. He could not be in a better place. These people just fabulous are are truly of a higher calling! He has supervision but yet has freedom. He has security and I have peace of mind that he is cared for and always will be.

Don't get me wrong, we still have issues! Currently, we are working on the "tales" that he contrives. Such as, he has told everyone in the day program that I am opening an Italian restaurant, that his brother has a baby, etc!  He can tell them with such detail that if you don't know us or haven't talked to us in a while,  you will believe them! It is something we will work through.

I am just so thankful for the text that I received from one of his caregivers that said that my son is so helpful around the group home and helps with other residents and that they love talking to him and that this story telling is just something they can work on as a goal! That did this Momma's heart good!

I hope our story will encourage some of you that may be having a bad day.  Know that there sometimes is a pot of gold at the end of the rainbow!

I met Sue online through her brother-in-law Dr. William Nash, who was our family doctor before he retired.  He now writes a blog, Organic Green Doctor.com.  I have come to love Dr. Nash, his wife Jo Ann, Sue and much of their family.  I love Sue as a resource because her son is just a little older than Red.  Their diagnoses stories are very similar.

Since our boys are older, we didn't have all of the benefit of some of early intervention, therapies that many of you may have.  My son was born in 1999 and 3 years later, when he saw his first neurologist, Aspergers wasn't even on the radar.  Even without some of those interventions, as you can see there is hope that our kids will live independently from us one day.

I just hope mine is sooner than later!

p.s. Please join us on Facebook Confessions of an Aspergers Mom It's a wonderful place to find support.  I update it daily with the crazy happenings in our house. We laugh away the tears over there.
Posted by Karen Wesley Writes at 12:59 PM