Not Everyone is Your Friend

Friends
How many of us have them?
Friends
One's we can depend on.
Friends
Before we go any further...Let's be friends. --Whodini

"Why is it that I have to try so hard to be someone's friend and be nice to them and they don't really talk back to me? I feel that it is always me who has to talk to them. Why is it always me that has to talk first? I give them plenty of time to speak. It really makes me frustrated when friends do that. And I don't even know if these people are my friend. That's why I don't add everybody on Facebook. Because not everyone is your friend."


He got good feedback from a few friends (typical teens I might add).  They told him the same thing that I always do, "Join a club where you can find people with mutual interest.  Friendships take time.  Don't worry things will work out."  Hopefully, he will believe them.  He certainly doesn't believe me.

In some ways, he is wise beyond his years, "Everyone is not your friend."  On the other hand, his feelings break my heart.  He has come so far in a years time.  He has more friends than he had a year ago.  He is now in a much more supportive school environment. But he is still reaching for the stars...he wants to be friends with THOSE people over there!


"I want to be friends with normal kids!"
"Why do all of my friends have to have special needs?"
"Why do I have to have this stupid Aspergers?!  It's not fair!"

How about be happy that you don't have to eat lunch alone...that there are people who seek you out and want to be your friend?  That's not good enough.  He wants to reconnect with peers from his elementary school that he hasn't seen in 4 years.  He is back in our home-school where he knows more people from the past.  He wants to go into the loud cafeteria and sit with them.  Although, they have probably already formulated groups that will be difficult to break into, which will really make him angry when they don't all turn around and make him the center of attention.   He has no idea how to have idle chit-chat about the non-sensical things that typical teens talk about.  He is not seeing things the way they are...or the way they will be.  He sees them in this fantasy medium...the way he WANTS them to be.  I can't tell him that though.  He doesn't believe me.


Some people with Aspergers can't stand being around a lot of people and the energy that it takes to maintain conversations, much less friendships with people who really don't "get" them.  Not my boy...he is longing to be a part of the popular crowd.  Well...I want to be skinny and have smooth, silky clear skin like the airbrushed models in magazines.  Anyone have any miracles for sale...cheap?

He's right about one thing...you shouldn't have to work so hard for friendships.  You shouldn't have to always be the person who speaks first, or who calls more.  A real friend will seek YOU out as much as you seek them.  Friendship should be mutual...it should develop naturally out of mutual interest, common ground and genuine feelings for one another.  Red wants the average, typical teenager to understand his Aspergers and how he see's the world.   It will be a miracle if this happens in the large group of typical teens that he wants to be a part of.  Most teenagers are innately self-centered and into themselves...especially the popular ones.  Unfortunately, they are not trying to take the time out to understand themselves...much less, understand someone complicated, mopey, and moody with special needs. 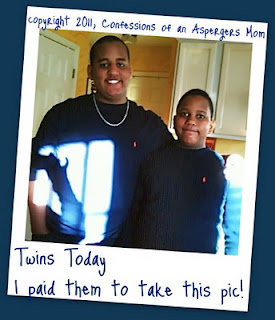 We are lucky if we find a handful of true friends over a lifetime.  I have been truly blessed in that department.  The thing is...I'm not picky.  I love people who love me despite my high-maintenance craziness.
Posted by Karen Wesley Writes at 7:04 AM