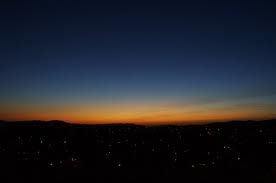 "Red is the first color you lose sight of at twilight."
"Red stimulates energy and can increase the blood pressure, respiration, heartbeat, and pulse rate."  www.sensationalcolor.com

He comes home like the angelic person that he can be.  He is the most calm we've seen in him in quite some time.  Happy to see the sun, happy to eat a fast food cheeseburger, happy to see his room and all of it's comforts.  He sits down and writes in the journal that he started keeping while he was away.  My son -sitting down to write something, by hand, unrequested --absolutely unheard of.  Next, he thoroughly cleans and rearranges his room.

It's over.  This is the best thing we could have ever done.  It was totally worth it.

The following day we add a medication that was prescribed by the attending doctor, but they had not given it to him because they didn't have any in the hospital.   He has been is all-over the place with his conversations.  He is clearly unfocused.  ADHD was alive and kickin'!  He is talking fast and incessantly because he isn't on a regular dose of medication for focus.  The conversations are fairly positive in nature other than the occasional request for his summer vacation plans.

Hubby and I go out to celebrate our new found son...by celebrate I mean drink margaritas.  We can actually leave the house, leave him with Nana and his brother without having to worry.  This is great!

We come home at midnight to find him on the phone with his friend.  He is involved in a very negative conversation with this friend who also has his own issues.  The friend is trying to diagnose him and tell him all of the things the doctors and his parents have done wrong.  What's going to happen next, etc.

In Red's mind, this is his only real friend, but the relationship has become toxic for him.  They can't get along.  Red takes everything this kid says as "golden".  It must be true if he said it.   The friend gets him all wound up and there is usually a fall out that we have to deal with.  Here he is upset again.  The last thing we need!  This night was the end of that friendship as far as I am concerned.  The cell phone is confiscated and the friend's number is blocked on our house phone.

Cut to Saturday afternoon after the second dose of this Dexadrine -he starts in on the manic, looping, nonsensical dialogue.  This goes on for hours!  My husband is with him this whole time.  I am out with my mom.  I am in bed when the boys come in from a movie.  Hubby has this glazed look in his eyes.  He is done! Cooked!

"I've been through 8 hours of complete torture!" Welcome to my life!

It doesn't get any better that night.  In fact we go into full blown meltdown, much like the one he had the week before.  Apparently, this kid can not take any medication in the Adderall, amphetamine family.  I told these freakin' doctors this.  They swore with the other medications on board, he should be fine.  Not!

On Monday we see his regular doctor.  He still has not come down out of this manic state.  She got to see it, live and in living color.  She had never seen him like this in her office.  This was the real deal.  He is screaming, telling me that he hates me --the whole nine-yards.  Now maybe she will believe the mother when she tells you that he can't take anything related to Adderall.  The doctor has to give him something right then and there in her office to calm him down, so that I can get him home.  Within 15 minutes he is in my car apologizing to me.

I know at this point, the kid was not ready to go back to school --too unstable.  Since we got all of the Dexadrine out of his system he is doing much better,  but we still have a lot of work to do.

The next episode of "As The Red Turns" will be brought to you soon.

Posted by Karen Wesley Writes at 9:35 AM