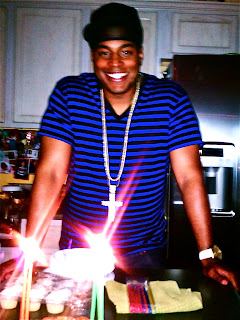 My friend pulled my coat recently to tell me that my blog makes it look like I only have 2 children.  "What happened to Slim Shady?" (let's call him or shall I call him Purple?  A combination of Blue and Red?)  Nah...I like Slim Shady, because he thinks he's cool but his actions are definitely Shady!

Shady is 23 years old.  Isn't he handsome? I didn't give birth to him, so I can't take credit for his great looks.  However,  I did raise him from the time he was 5 years old.  He is my son.  I chose him.  I chose to marry a man who had a five-year-old active little boy, when I had no such baggage.  Yes, I say baggage, because of course, the 5 year-old son came along with an ex-wife, which almost always adds a little drama to a relationship.  Actually, I admired the fact that my then boyfriend, had risen to the challenge of being the custodial parent.  How many men do you know who fight for and win custody of their children?  He must be a good guy right?

I was there when he crashed my brand new car into the side of the house when he was trying to hide his girlfriend's car in our garage, so that her crazy mother wouldn't know she was at our house.  I was there when he got arrested for pure stupidity.  I  was there when we payed the lawyer to prove that he hadn't done anything illegal...just stupid.  This was at expense of the new kitchen floor that I was about to get, until we spent the money on his freedom.

I was there at graduation from high school and for the first year at the University that we paid dearly for, only to find out later that our money had been waisted.  After football season was over, he barely went to class.  Instead he stayed up all night playing video games and chasing skirts (very short, skanky, skirts).

We were there to buy the first car that was hit and damaged beyond repair.  We were there to help buy the second car, so that he could get to work and to the community college, to make up for the classes he failed at the university.

I was there to say good-bye as he went off to boot camp when he joined the Army National Guard, after his dad had walked him through the process of  joining the Air Force.  I was very proud as he finished boot camp and started over again as an ROTC student at another local university.

I was always there to listen, to give advice, to discipline, to get his father to day "yes", to support him and love him as though my blood runs through his veins.


You suck! You suck because you hurt your father over and over again when you lie to him  --when you ask for his advice and then refuse to take it.
You suck because you fail to call, bring a flower or a card for my birthday.   You don't show your face on Mother's Day.  I mean come on -you live 10 minutes from here.
You suck because you don't  follow the stellar example of the man who raised you.  The man who is responsible and treats women with the utmost respect.  You don't stand on your own two feet.  Instead, you use women for what they can do for you.  Then you turn around and disrespect them by using offensive language to communicate with them.  You do this in front of your 15 year-old, impressionable brother.

You suck because you know that both of your brothers have disabilities and could use the love,  support and example of a big brother, yet you're too busy to take any time for them.  You can't take them out to shoot hoops, go to the gym to work out or toss a ball at the park.  These things are free!

You really suck because when your brother was in the hospital last week, you didn't show up for a 15 minute visit or make a 5 minute phone call.  This tops everything!


At the same time you disappoint me on so many levels, I've actually lost count.

Congratulations, you are finally featured on my blog.


I love you always.  I  can't wait for the day that you rise to the occasion and become the independent, strong,  family-oriented man,  that we raised you to be.


p.s. Where's my cake plate that I sent home with you for your birthday in March?  Oh yeah that's right, I don't think I've seen you since then!

Posted by Karen Wesley Writes at 8:03 AM