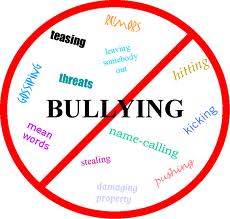 I am lollygaging around the grocery store when my cell phone rings.  It's the middle school.  It's only 9:30 a.m.  What did he forget?  I think to myself.  It's Blue's voice on the other end of the phone, but he doesn't sound like himself.  He pauses before he says anything.  When he finally does I hear that he is very upset.

"Mom I had an incident this morning," he says hesitantly.  I'm starting to freak, it sounds like he's crying.
"What kind of incident Sweetie?"
"I'll let Ms. K tell you.  Hold on," he says.
Ms. K puts me on speaker phone so that I can talk to both of them.

Apparently, there was an altercation in the cafeteria this morning.  Today he decided to have breakfast at school.  Lucky me! Or so I thought. I was all too happy not to have to prepare anything for him.

After gets his food, he is looking for a  place to sit.  Some kid says something rude to Blue.  "No one likes you.  You can't sit here," and I don't know what else.  Then he attempted to put a dirty napkin on Blue's breakfast tray.

OMG!  No you didn't! Don't mess with his food with your germs! His food is sacred.  He doesn't want it touched by anything or anyone.  He's been bullied a few times by boys this year.  In P.E. they say he's too slow and that he sucks at basketball.  Some have called him weird, etc.  Well not today buddy!  He looses it.  He rips this kid a new one --cursed him out,  probably called him a "bastard" among other choice words.   For some reason bastard is his "go to" word when he is really angry.  I don't think he even knows what it means.  Not only did he curse at him, he punched him in the arm for good measure.  Don't f- with me kid!

Is it bad to say, "Way to go Blue?!! Don't let that boy mess with you!  I'm sick of these kids trying to push you around!"  Of course I didn't say that, but I sure did think it!

He felt so bad for what he had done.  He felt bad for loosing control and getting so angry  I said the right motherly words over the speaker phone,  "What do you think you could have done differently?"

"So this incident will teach you to take a deep breath and make a better choice the next time right?  Try not to worry about it.  Don't let it ruin your day.  It's over.  Let's move on."

After the incident happened, he actually went and told on himself! He was so upset, he had to talk to someone.  He told his special ed. teacher everything.  Then they went to talk to Mr. D. the 6th Grade Principal. He did get lunch detention for 2 days.   I think he should get leniency for telling on himself...but whatever!  I suppose he needs to learn to try to keep his cool and just get the other guy in trouble.

At the same time, these kids need to learn that he is the wrong one to mess with.  Yes...he may be a little geeky, smart, and not very athletic -but that doesn't give you the right to be mean and ugly to him.

Blue actually thought he was being the bully because he hit the kid and the kid had not hit him.  When he comes home from school he's really beating himself up about it.  I tell him, "A bully messes with people for no reason at all.  Because he's having a bad day, or just because he's mean and he thinks he can get away with it.  You hit him for a reason.  You didn't just arbitrarily pick him out and go hit him.  He was being mean to you and you reacted.  That is human.  That's not bullying."   I had to tell him to take it easy on himself.  "No one is upset about this anymore.   We have all moved on. You need to give yourself a break."

The good news or should I say the sensational news is that we found out today that he received commended scores on all of his state testing!  Here in Texas we call it the TAKS.   Don't mess with my boy!  Watch out world!  Here he comes!


Many of you are stopping by to visit from TopMommyBlogs.  Thank you for coming!  Please leave the same way you came by clicking below.  Each click is a vote to get the word out about my blog.  Thanks again!