This year was a different kind of Christmas for our family.  We've taken strange to a whole new level, but strange can be a good thing when you have a family like ours. We celebrated Christmas on Christmas Eve this year.  Everyone was pleased with their gifts.  Blue did not get his IPad, but he did get the Apple T.V. and a new television for his room.  The one he had was more than 25 years old. He was happy.  Red, got gift cards galore which along with money he has earned doing chores, will put him close to scoring that camcorder he wants.

Our eldest son and his girl came to the house.  We shared a meal together, which I ordered.  That's right I did not cook! Blue and I did bake Toll House and sugar cookies for dessert.  We all exchanged gifts.  I couldn't believe they brought Blue a turtle (which of course, I will end up being responsible for).  In fact, since Blue was leaving the very next day, guess who's been feeding it while he's gone?!

We celebrated Christmas Eve because half of our crew (Dad and Blue) were leaving on Christmas morning to go to North Carolina and Georgia to visit with my husband's brothers and their kids.

It may seem a bit odd that our whole family isn't spending the holiday together.  But you see, we don't have one of those conventional kind of families, where everyone sits around the fire singing Christmas carols while  eating milk and cookies.  The truth of the matter is that the boys are quirky, anxious and they fight quite a bit which takes away from the "fun" of it all.

Now last year we all went away together to visit my husband's parents.  Parts of the trip were fun...but overall, it was exhausting!  I spent most of the time trying to keep meltdowns from happening. All of the cousins were together at Grandpa's house.  They played, made videos, opened presents, etc.  Blue didn't sleep well most of this time because he likes to sleep alone, with no sounds to disturb him.  This is a little difficult to accomplish when the house is overflowing with family.

After Christmas, we all headed to Florida to go to Universal Studios.   Red was under a great deal of pressure to be well behaved around his grandparents, so as soon as they were out of sight, he'd have these horrible melt-downs, which we would try to keep as quiet as possible so that the grandparents wouldn't feel the need to get involved, which of course would make matters worse.

The truth of the matter is...it was a very expensive, exhausting trip.  Most of our family vacations leave me thinking, "Why did we do that?  That wasn't fun!"

So this year we decided to break up the party a little bit.  And the truth is, yes, I confess..I couldn't be happier!

Red took a trip earlier this summer with his Dad, were he was very well behaved (because I wasn't around).  He also took a trip by himself to see my family in California, where he had a complete blast.  Blue had a trip alone with me and Dad to Sea World this summer (that one wasn't so fun).  He was still pretty anxious during that time.

Blue has calmed down quite a bit, so he and his dad are off visiting his uncles and cousins. There are no moms involved on this trip and the boys are having a great time.  They had a white Christmas where he got to play in the snow.  He has slept pretty well, except the first night that he shared a hotel room with his dad (the snore monster).  After that night he shared a room with his cousin and slept much better.

So this Mom spent Christmas day sitting on her butt by the fire...eating cookies for breakfast, drinking wine and eating leftovers for dinner.  Red went to have dinner and play video games with a friend while I flipped from one Christmas movie to the next.  My Mom went off to California to visit my brother for the holidays, so I was literally all alone on Christmas.

Don't tell anyone...but this may very well be the best Christmas ever! 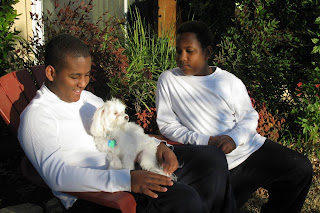 Red, Harry and Blue, December 2010
Happy Holidays to you and Yours!
Posted by Karen Wesley Writes at 10:34 AM